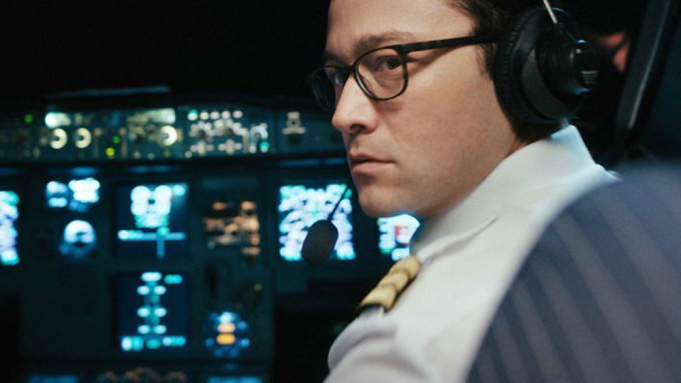 Another airplane hijacking movie? This particular sub-genre has become a regular feature of the American blockbuster ever since 9/11, but 7500 promises something different than action-hero theatrics. The English-language debut feature from German filmmaker Patrick Vollrath is all about capturing, with painfully-realized authenticity, the madness of just such a terrorist scenario from a lone co-pilot’s perspective. It’s an unconventional, technically-proficient thriller and a curious leading role for Joseph Gordon-Levitt that puts a lot on his shoulders.

7500 strives for realism; the opening scenes are little more than security footage of Berlin Airport. Travelers come and go; it’s so quiet you might think the volume has accidentally been turned off. There’s a focus on a handful of Middle Eastern men making their way through security. It’s all just another day on the job for American co-pilot Tobias (Gordon-Levitt), who lives in Berlin with his young son and girlfriend, Gokce (Aylin Tezel), who happens to be a stewardess on the same flight to Paris.  They sneak kisses in the cockpit and try to keep their relationship under wraps, but Tobias sucks at keeping secrets.

All of this is taking place in the plane’s cockpit, and that’s where we’ll stay for the movie’s duration. It’s a tight, low-key effort from Vollrath, that puts considerable weight on Gordon-Levitt to carry the tension through. But it doesn’t always work; the first 30 minutes are fairly dull as Tobias chats with his pilot about matters that have nothing to do with the plot.

Things pick up considerably from there when hijackers attempt to bust into the cockpit. A scuffle breaks out and only one of the attackers makes it inside. He manages to gravely injure the pilot, leaving Tobias the man in control. The lives of everyone on board are in his hands now, and keeping the plane in the air is just one of the many ways he’ll be forced to decide all of their fates.

7500 is a film that will have audiences asking “What would I do in that situation?” Vollrath never introduces us to the passengers, which keeps us emotionally disconnected from them, but at the same time we can see, via a small monitor screen, the terrorists causing havoc outside the door.  They can’t get in, but Tobias is forced to make some excruciatingly difficult, heartbreaking choices when a few travelers are threatened. Does he open the cockpit door and risk losing everyone, or does he keep it closed and endanger a few of emotional significance?

When 7500 heaps a ton of weight on Tobias to make a decision, it’s a gripping pressure-cooker of responsibility and ethics. At other points it flies into ludicrously contrived territory with characters making choices that make no sense. Vollrath doesn’t give himself a lot of options by keeping the action focused in a single, contained location. It becomes a function of plot that Tobias gets knocked unconscious for a too-long stretch, allowing for another hijacker to enter and muck things up, only to make a consequential choice later that doesn’t feel earned. But that is another big problem with 7500 in general; that none of the characters, be it Tobias or the one-note Muslim terrorists (they hate the West because we suck, is the gist of it) have many nuances to latch on to.

That makes this a pretty easy role for Joseph Gordon-Levitt, who seems to have slipped out of the Hollywood radar of late. His last feature role was 2016’s dud, Snowden, and before that he had been a series of underwhelming attempts to turn him into a studio A-lister. He’s matched pretty well with Omid Memar as Vedat, an 18-year-old hijacker whose internal struggle becomes a catalyst for the final act. While his motivations are also under-written, the back-and-forth between him and Tobias flips the cockpit power structure in an interesting way, leading to a strange sort of Stockholm Syndrome as they both fight to survive.

7500 is precise in execution and walks a fine balance between thrills of the genre and its need to be genuine. Vollrath’s commitment to his vision shows, and could lead to bigger and better things as his feature career takes off.