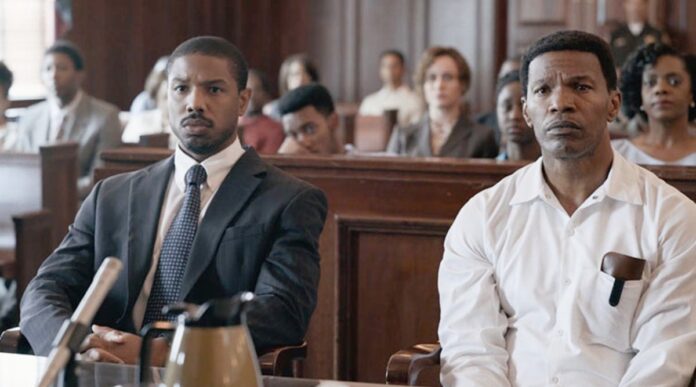 Unless your head has been buried in the sand for the last week, you’ve undoubtedly heard of the murder of George Floyd. While the killing of an unarmed black man has become all-too-commonplace, Floyd’d death seems to have been the proverbial straw that broke the camel’s back, leading to days of protests not only against police brutality, but those empower who allow it and encourage it.  Many in Hollywood have responded in their own way, some with vocal shows of support, some by making films on the issue, and at least in the case of Just Mercy by making it available to all to see.

Just Mercy, which stars Michael B. Jordan, Jamie Foxx, and Brie Larson, has been made available for free on all VOD platforms as a response to George Floyd’s murder. So what’s the connection here? The 2019 legal drama centers on the true story of civil rights attorney Bryan Stevenson, founder of the Equal Justice Initiative, who has dedicated his life to defending those falsely convicted of crimes, especially those who may have been poorly represented due to race.

We believe in the power of story. #JustMercy is one resource we can offer to those who are interested in learning more about the systemic racism that plagues our society. For the month of June, #JustMercy will be available to rent for free on digital platforms in the US. @eji_org pic.twitter.com/3B2IHMNk7E

This may seem like a small thing, and in the overall scheme of things it is, but this is a tremendous way of making a statement in the way one knows how. Just Mercy is a really good film, too, directed by Destin Daniel Cretton, that was surprisingly overlooked during awards season. Take this time to check it out while you can.

‘Just Mercy’ Brings Some Heavy Emotion with Its New Trailer