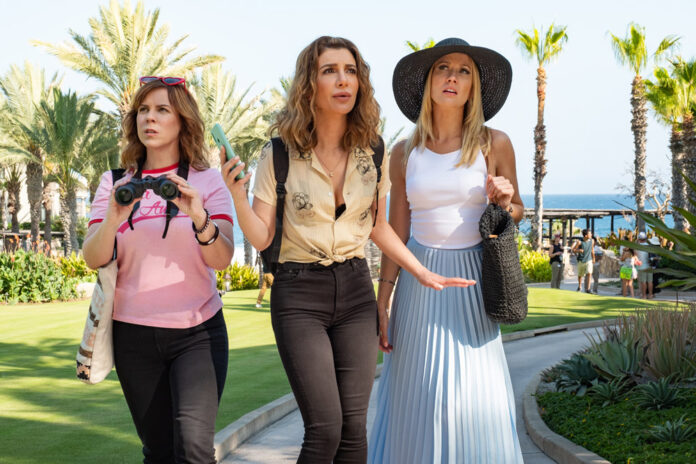 In one of my favorite Seinfeld episodes, poor George Costanza leaves a nasty voicemail for a woman he thinks has ghosted him. After finding out it was all a big misunderstanding, he enlists Jerry in a plot to get into her house and change the tape…because voicemails were on actual cassettes back then. Damn I’m old. Well, the upcoming Netflix comedy Desperados is taking a page from the same book, only with a trio of funny ladies, a trip to Mexico, and significantly updated technology.

Desperados stars New Girl‘s Nasim Pedrad as a woman unlucky in love who finally meets the guy of her dreams. But when she thinks that he has ghosted her, she drunkenly sends him a ranting email only to find out it was all a mistake. Anna Camp (Pitch Perfect) and Sarah Burns (Enlightened) play her best friends, who join her on a desperate trip to Mexico to delete that email before he reads it.

Also in the cast are another New Girl alum, Lamorne Morris, plus Robbie Amell, Heather Graham, and Mike Mitchell. The film was directed by LP and penned by Ellen Rapoport, both in their debuts.

Right off the bat I’m getting vibes of one of my favorite recent Netflix comedies, Ibiza, which also starred three hilarious ladies on a wild trip spurred on by some hot dude.  Sign me up for this one, especially since there can never be enough Anna Camp as far as I’m concerned.

SYNOPSIS: A panicked young woman (Nasim Pedrad) and her two best friends (Anna Camp & Sarah Burns) fly to Mexico to delete a ranting email she sent to her new boyfriend. On arrival, they run into her former beau (Lamorne Morris), who soon gets caught up in their frantic scheme. Desperados also stars Robbie Amell and Heather Graham.

Sundance Review: ‘How It Ends’