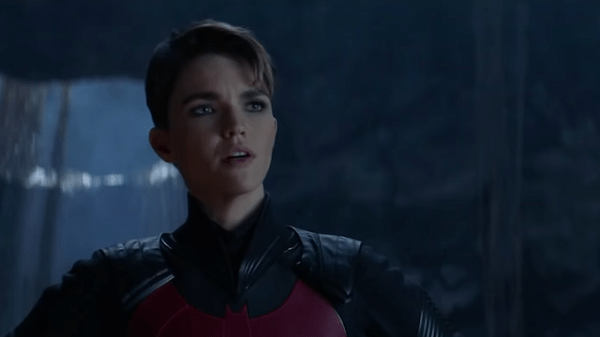 Ruby Rose, who just finished her first season as Kate Kane/Batwoman in the inaugural season of the CW’s adaptation of Batwoman (Bruce Wayne’s cousin who also dons the cape in his absence), is calling it quits.  And right after the first season just ended this past Sunday.  Wait, what?!?  After appearing in the CW’s “Elseworlds” crossover event, Kate Kane got her own show on the ever expanding superhero network, and it seemed as though everything was working well for the first season of the show.  She had a captivating villain (her scene-stealing twin sister Beth/Alice (Rachel Skarsten)of the Wonderland Gang, who tormented her the whole season) and genuinely had a great run and was fitting well overall with the Arrowverse (even appeared in the “Crisis on Infinite Earths” crossover event), and even had a planned smaller-scale crossover next season with just her and the Man of Steel.  So it’s a bit of a surprise that all of a sudden the lead of a promising new show would just out of the blue call it quits.

Deadline reports, that Rose herself decided to walk away from the iconic role just as it was picking up steam.

“I have made the very difficult decision to not return to Batwoman next season.  This was not a decision I made lightly as I have the utmost respect for the cast, crew and everyone involved with the show in both Vancouver and in Los Angeles.  I am beyond appreciative to Greg Berlanti, Sarah Schechter and Caroline Dries for not only giving me this incredible opportunity, but for welcoming me into the DC universe they have so beautifully created.  Thank you Peter Roth and Mark Pedowitz and the teams at Warner Bros. and The CW who put so much into the show and always believed in me. Thank you to everyone who made season one a success – I am truly grateful.”

As of right now, neither Rose, nor anyone over at the CW is saying exactly why Rose is quitting the show so early in its infancy.  Sources are saying it’s not related to the near paralysis-inducing accident that happened while filming a stunt during the first season of the show.  The CW is now actively working on recasting the role for Kate Kane to continue production for the show, which already has a second season greenlit.  Warner Bros would like to continue the tradition set forth already: casting an LGBTQ actress for an LGBTQ role.  If they wanna break that precedent, they could just cast Rachel Skarsten to pull double duty as she played villain Alice (who is on the show is Kate’s twin sister), but that probably won’t happen.  Either way, they have to start casting as soon as possible as the second season is set to premiere in January 2021.