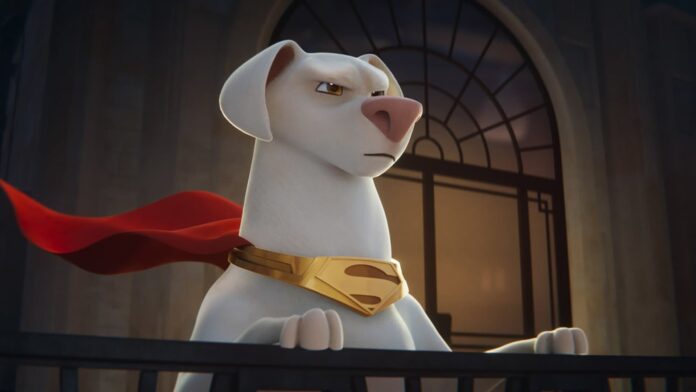 The marketing minds over at Warner Bros. shouldn’t have scheduled DC League of Super-Pets so close to San Diego Comic-Con. The weekend after a massive event where literally 15+ superhero projects were announced for the next three years probably isn’t the best time to release a kid’s superhero movie that is a blatant money grab. Pulling from Secret Life of Pets, Spider-Man: Into the Spiderverse and of course, DC Comics, DC League of Super-Pets struggles to find an original thought amidst this lesser-known property.

Like most Superman origin stories, we first meet Clark Kent (John Krasinski) as a baby when his home planet of Krypton is about to be destroyed. To save him, his parents put him in a space pod where his puppy Krypto (Dwayne Johnson)  joins him at the last minute. A lot of Superman’s beginning is understandably washed over for a younger audience, but they both grow up and we see them repeatedly save the world. However, Krypto’s clingy ways and cushy lifestyle is threatened by Clark’s impending engagement to Lois Lane (Olivia Wilde).

After saving the world from Lex Luther (Marc Maron, who is animated to look like a buff Jeff Bazos), the two cross paths with a group of rejected shelter animals, led by Ace (Kevin Hart). When Lulu (Kate McKinnon), a deranged guinea pig previously tested on by LexCorp and up for adoption, gets her paws on a specific kind of kryptonite that gives animals superpowers. While the rock gives Ace and his friends new super abilities, Lulu kidnaps Superman and leaves Krypto without powers altogether. The eclectic group of pets must band to together to save the city, the Justice League (including an underused but delightful Keanu Reeves as Batman), and Superman himself.

From there, the plot follows what we’ve come to know from kids movies – the two leads are brought together and must work as a team to save the day. They learn a lesson how to love one another and try to pass that lesson onto the villain. By the time we get to that final plot point though, we have a good 30-45 minutes left of the film. The ending takes over the latter third of the movie and drags it through the final battle while hitting the same emotional beats over and over again.

One thing to appreciate about DC League of Super-Pets is its lack of toilet humor. Besides a bidet joke, there’s not much farting or burping, The dogs don’t even sniff butts. Most kid’s movies go directly for the fart joke for a cheap laugh, and while this is far from sophisticated humor, it’s nice to watch a cartoon devoid of that. Granted, there are plenty of other ways the script was subpar– from its general lack of joke ratio to too many characters living off of quippy one-liners – all that can be overlooked because a fart machine was not heard in this film.

Kevin Hart and Dwayne Johnson literally have the same dynamic in cartoon form as they do in live-action projects except without the physical size difference. Because Super-Pets pulls from many other kid-centered projects including The Secret Life of Pets (which he was in), Hart reigns in his vocal performance and is more of the straight dog to Johnson’s out-of-touch super-hound.

However, the absolute superstar of the DC League of Super-Pets is Natasha Lyonne as a pansexual, blind tortoise who is literally bleeped for cussing three times during the film. She is too slow to even eat lettuce and hits on construction hats and fire hydrants. It’s weird, unexpected and the only thing that kept me awake when the plot continued to drag and the same emotional beats were hit repeatedly.