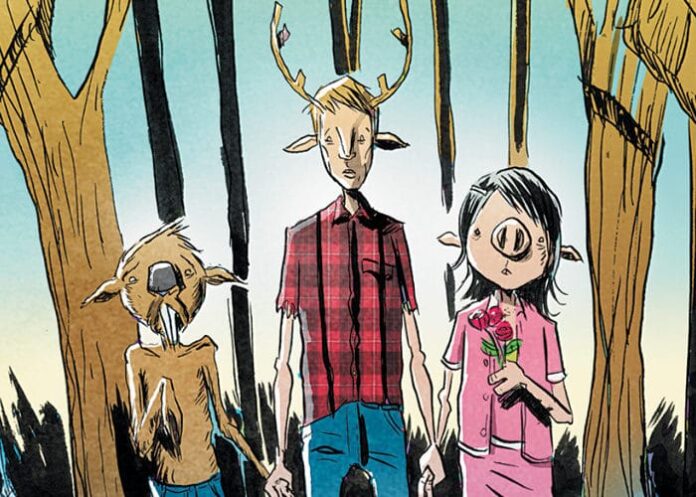 Robert Downey Jr. is switching teams. Sorta. For more than a decade he was Tony Stark, the man at the heart of the Marvel Cinematic Universe. That’s over now, and Downey is taking his business over to the Distinguished Competition by adapting DC Comic Sweet Tooth as a Netflix series.

Okay, so it’s not a DC Comics superhero or anything, but instead the Vertigo comic Sweet Tooth by Jeff Lemire. Downey will produce a live-action series of Lemire’s strange comic about a half-boy, half-deer named Gus who must leave his beloved forest home to save the outside world from an apocalyptic event.

The cast being assembled for this is pretty great, too. Christian Convery (Beautiful Boy) is taking on the role of Gus, Josh Brolin will narrate the film, and they’re joined by Will Forte, and Artemis Fowl actor Nonso Anozie and The Big Sick‘s Adeel Akhtar.

Co-Showrunners are genre maestro Jim Mickle (Cold in July) and Beth Schwartz (DC’s Legends of Tomorrow), with Mickle directing the 8-episode series. Mickle directed the Hulu pilot from a few years ago, as Downey has been trying to get this off the ground for a while. So far, Downey’s only role is as a producer with no plans for him to do more. The press release describes Sweet Tooth as having “broad appeal” and being “family-friendly”, which I think is stretching things a bit. It’s a bit off the beaten path, but don’t be surprised if they lighten things up for Netflix. [THR]