Home Reviews Cortland Review: ‘The Painter And The Thief’A Raw And Intimate Portrait Of A...
Facebook
Twitter 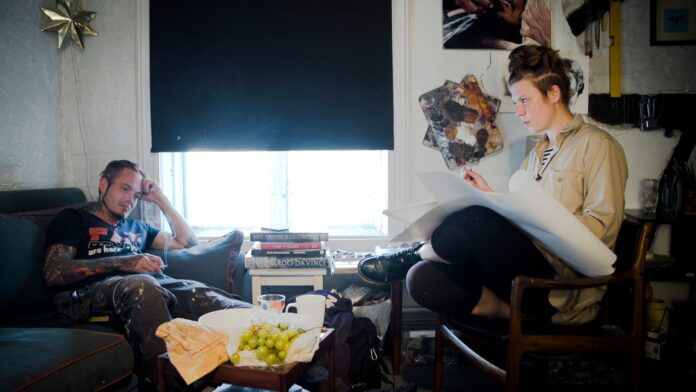 In 2015, Czech painter Barbora Kysilkova had two paintings stolen from her at an art exhibition in Oslo. Worth about 20,000 euro, taken in broad daylight and carefully removed from their frames, the loss of the paintings didn’t leave the Kysilkova with thoughts of revenge or anger, but one of curiosity. Wanting her work returned, she follows her case into the courtroom, meeting one of the thieves, Karl-Bertil Nordland. Instead of screaming and crying, Kysilkova asks to paint him. This sparks one of the most complex and intricate relationships on film, resulting in the aptly titled documentary The Painter and The Thief.

Documentarian Benjamin Ree followed Kysilkova and Nordland for three years, through their meeting, tensions breakups with partners, financial trouble, drug addiction, and even jail. What’s captured are two very unique people, both far more complex than the labels of “painter” or “thief” or any other name society might bestow upon the two. And that’s the point, isn’t it?

Disappearing as much as a documentarian can, Ree lets his subjects define themselves and each other by their actions and behavior, not their pasts. Though Kysilkova has this immense joy and curiosity inside of her that drives this need to understand Nordland, there’s an angst and darkness gnawing there that shows itself in reckless behavior. Why she would immediately ask to paint him, instead of resulting to anger is a fascinating character study, making you want to know her. Nordland is extremely troubled but also extremely endearing, his face a remnant of childhood lost with piercing boyish eyes. Ree doesn’t let any judgment past his lens and instead treats his subjects with a natural almost voyeuristic filter.

Ree is a master storyteller, and at 30, it’s impossible to think about where he will take the genre in the decades to come. The film premiered at this year’s Sundance Film Festival, earning a Special Jury Award for Creative Storytelling. His first film Magnus, about the chess champion, was also praised when it was released. To think this is his second feature and he already has such a grasp on capturing the human condition in such a cinematic way, is astonishing. His narrative and stark approach to documentary filmmaking bring out an inner humanity rarely seen on film.

Easily one of the most moving and intimate pieces of cinema this year, The Painter and The Thief won’t just be on your mind long after viewing, but possibly embedded in your soul.

The Painter and The Thief is available for purchase through iTunes, google play, and on-demand and for streaming on Hulu.

Watch the trailer below.