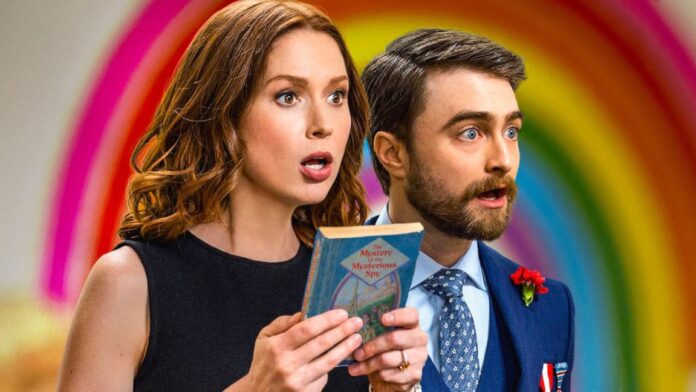 Netflix is really getting behind these interactive specials, and for good reason. Black Mirror: Bandersnatch proved to be quite the hit for them, and now they’re giving it another go. Only this time it’s with Unbreakable Kimmy Schmidt: Kimmy vs. the Reverend, which lets viewers decide how the characters on screen will act.

SYNOPSIS: “Kimmy Schmidt (Ellie Kemper) sets off on her biggest adventure yet. Three states! Explosions! A dancing hamburger! And you, the viewer, get to decide how the story goes. Will you foil the Reverend’s (Jon Hamm) evil plan and get Kimmy to her wedding on time? Or will you accidentally start a war against the robots? So grab your remote and a tray of delicious scrod, ‘cause Kimmy’s got her own Netflix interactive special!”

I remain unsold on these interactive specials. They seem like a cheap gimmick with little long-term entertainment value. But if they draw tons of viewers to Netflix, who am I to complain?

Unbreakable Kimmy Schmidt: Kimmy vs. the Reverend hits Netflix on May 12.

Unbreakable Kimmy Schmidt: Kimmy vs. the Reverend — an all-new interactive special premieres May 12

Ellie Kemper,  Tituss Burgess, Jane Krakow­ski, Carol Kane, and Jon Hamm return — plus Daniel Radcliffe joins in on the fun as you get to decide how the story ends! pic.twitter.com/HU2tjF8xY2