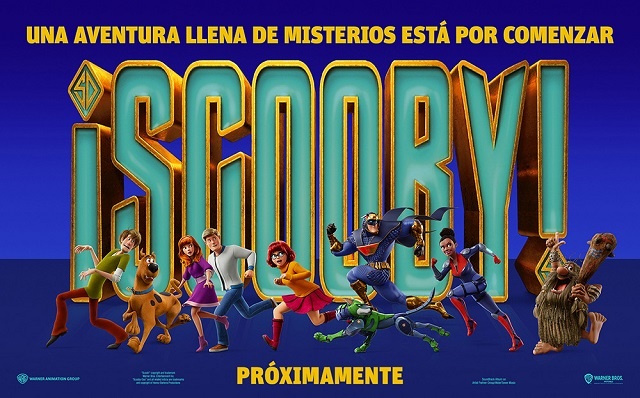 Sad news for Scooby-Doo fans earlier this week as Warner Bros. removed SCOOB! from the release schedule. With the pandemic going on out there right now it’s unclear when we’ll see the animated movie which is hopeful of launching a Hanna-Barbara cinematic universe. Trailers we’ve seen have introduced more than just Scooby, Shaggy, and the rest of Mystery Inc., but also Blue Falcon and his pal Dynomutt.

One character that’s been missing? Captain Caveman, who we know will be voiced by Tracy Morgan. Well, he’s now been revealed in a new SCOOB! international poster. His look is pretty faithful to the popular prehistoric superhero, although his club has been given an upgrade.

SYNOPSIS: The first full-length animated Scooby-Doo adventure for the big screen is the never-before told stories of Scooby-Doo’s origins and the greatest mystery in the career of Mystery Inc. “SCOOB!” reveals how lifelong friends Scooby and Shaggy first met and how they joined with young detectives Fred, Velma and Daphne to form the famous Mystery Inc. Now, with hundreds of cases solved and adventures shared, Scooby and the gang face their biggest, most challenging mystery ever: a plot to unleash the ghost dog Cerberus upon the world. As they race to stop this global “dogpocalypse,” the gang discovers that Scooby has a secret legacy and an epic destiny greater than anyone imagined.