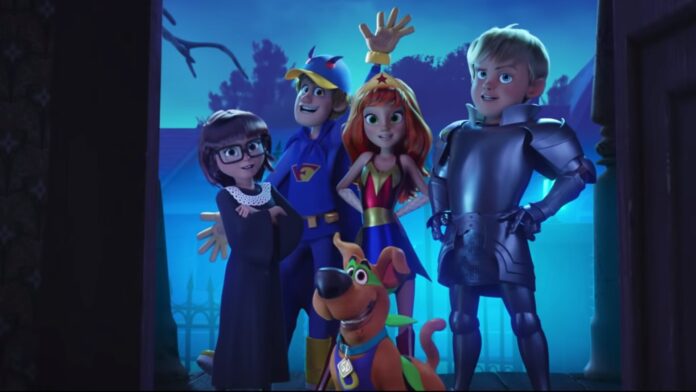 Warner Bros. hopes to build themselves a new cinematic universe of Hanna-Barbera characters with Scoob!, the animated always-hungry canine’s first CG adventure. It seems far-fetched until you realize the classic cartoons already had their own mega-franchise of sorts. I mean, what was Laff-A-Lympics other than the Saturday Morning cartoon version of The Avengers? Still, creating one in the mold of Marvel proves a little bit problematic as the endearing qualities of Scooby-Doo and Mystery Inc. are overwhelmed by ambitions too big to be solved.

The friendship between Scooby-Doo and his loyal stoner pal Shaggy (less stoner here, just a natural slacker) has always been central, and so it makes sense for veteran director Tony Cervone to start there. Voiced by Frank Welker (the original Fred Jones and longtime Scooby voice actor), a young Scooby is a stray causing chaos as he steals food, as in massive salami rolls, just to survive. That’s when he encounters someone just as lonely as him, a friendless Shaggy (Will Forte), who also shares his massive appetite. On Halloween they make a group of new friends who will set them on the path we all know: Fred (Zac Efron), Velma (Gina Rodriguez), and Daphne (Amanda Seyfried). Together they stumble into a haunted house and solve a mystery that had been plaguing Venice, California, and so the Mystery Inc. team is born. He wold’ve gotten away with it if it weren’t for those meddling kids!!

The pint-sized adventures of Scooby and his pals would’ve been sufficient, and charming enough, for kids stuck at home in quarantine. But Scoob! has loftier goals that get in the way. Originally set for a theatrical release, hence the big-name celebrity voice cast, the film is all about franchise-building ahead of story, which quickly goes off the rails as more characters are introduced. Fast-forward to the present, and the gang have started to splinter. The bumbling Scooby-Doo and Shaggy are ostracized from the team for being useless, only to have that duo attacked by miniaturized killer robots with a serious Minions complex. Scooby and Shaggy are fractured further by the arrival of superhero Blue Falcon (Mark Wahlberg) and his robo-canine sidekick Dynomutt (Ken Jeong). The crime-fighting tandem are joined by whiz kid Dee Dee Sykes (Kiersey Clemons), normally a regular of the Captain Caveman cartoons.

A massive scheme unfolds involving the villain Dick Dastardly (Jason Isaacs), an abundance of Simon Cowell (playing himself, and yet sounding unlike himself), ancient Roman history, a random jaunt to a prehistoric island for a gladiatorial battle with Captain Caveman (a wildly miscast Tracy Morgan), and the prevention of a literal Dogpocalypse. As the team dodges lasers, deals with their own insecurities, and crosses paths with a who’s who of Hanna-Barbera characters, there isn’t much room left for Scooby-Doo and his pals. Cervone and an army of screenwriters also have trouble melding the various comic styles of this universe of characters. The simple down-to-earth shenanigans of Mystery Inc. don’t necessarily gel with the mustache-twirling villainy of Dick Dastardly, who certainly has no business manning an army of death drones, and doesn’t really fit with the superheroics of Blue Falcon. That said, this Blue Falcon is far from the one we’re accustomed to, with Wahlberg’s hilariously self-absorbed take very reminiscent of Will Arnett’s Lego Batman. A live-action version might be a fun way to go.

Where Scoob! really scores is in the updated visuals. The geniuses at Reel FX previously worked on the gorgeous Mexican film The Book of Life, and their expertise and attention to detail shows here. The look they’ve captured has the feel of classic hand-drawn 2D animation, really emphasizing the cartoony world these characters exist in, while adding 3D elements to make it more contemporary. Colors pop from the screen, especially when Blue Falcon and Dynomutt enter the scene, and it’s safe to say this is the best a Scooby-Doo mystery has ever looked. The voice work is strong for the most part, although Morgan’s Captain Caveman sounds like somebody trying to do Mel Brooks, and try as he might, Forte doesn’t make you forget about Matthew Lillard in the live-action movies from the early 2000s.

A straight-to-digital release could ultimately be a saving grace for Scoob!, as it might tap into the same well that led Trolls World Tour to box office heights.  While it doesn’t quite work as the launching pad for a cinematic universe, as colorful entertainment for homebound kids it’s pretty easy to swallow like one of Scooby and Shaggy’s oversized sandwiches.