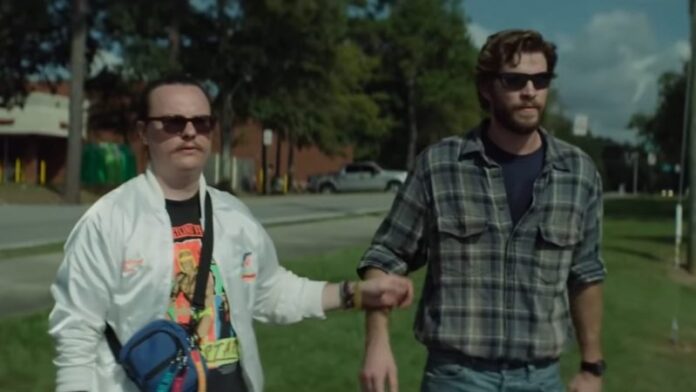 If you know the name Clark Duke it’s probably from his rambunctious supporting roles in comedies Kick-Ass, Hot Tub Time Machine, Sex Drive, and The Office. Now he’s taken what was learned in front of the camera and put it towards his directorial debut, the comedic-thriller Arkansas. Judging by the cast, Duke has made some pretty cool friends along the way.

The Fargo-esque crime movie stars Liam Hemsworth, Michael K. Williams, Vince Vaughn, John Malkovich, Vivica A. Fox, Eden Brolin, and Duke himself. It follows a group of southern drug dealers who try to live normal lives by day, and of course, they fail miserably at it.

Duke not only directed and co-stars, he also wrote the script and produced. So when the movie’s world premiere at SXSW was canceled due to the coronavirus, it had to have him hardest of all. Fortunately, Arkansas will still see the light of day on May 5th.

SYNOPSIS: In Clark Duke’s directorial debut, Kyle (Liam Hemsworth) and Swin (Clark Duke) live by the orders of an Arkansas-based drug kingpin named Frog (Vince Vaughn), whom they’ve never met. Posing as junior park rangers by day, they operate as low-level drug couriers by night under the watchful eye of Frog’s proxies (John Malkovich and Vivica A. Fox). Swin then settles into his day job by taking up a relationship with Johnna (Eden Brolin) against orders to blend in while Kyle continues to question his night job by trying to figure out who Frog really is. Their world is then upended after one too many inept decisions, and Kyle, Swin, and Johanna find themselves directly in Frog’s crosshairs, who mistakenly sees them as a threat to his empire. Based on John Brandon’s best-selling book of the same name, ARKANSAS weaves together three decades of Deep South drug trafficking to explore the cycle of violence that turns young men into criminals, and old men into legends.