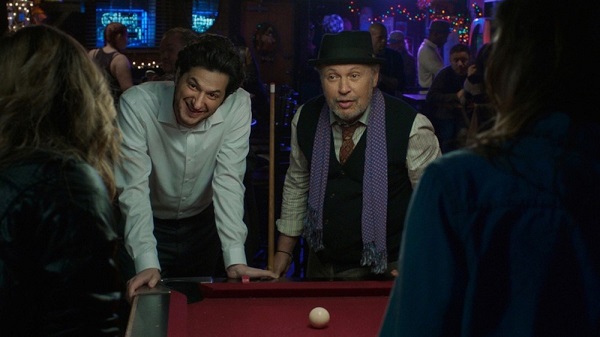 Everyone knows the old Hollywood tale of leaving everything behind in search of stardom.  We often hear tales of people who go across the country in search of being on the big screen and everyone ends up rich and lives happily ever after.  Of course, this often is not the real case.  It’s a tough town.  Many times, people just don’t cut it, and have to end up going back home to lick their wounds.  That’s exactly what happens to Scott (Ben Schwartz) in Standing Up, Falling Down from first time director Matt Ratner.

Scott left Long Island with the hopes of becoming a famous stand-up comedian, but after 4 years of being incredibly poor in LA and forcing to perform at coffee shops where he gets interrupted by people going to the bathroom, he realizes that it’s time to head back to live with his parents on the East Coast.  It’s a sobering experience for anyone, and Schwartz pulls it off very well.  His mother (Debra Monk) is more than happy that her baby boy is back home, she even didn’t change one thing about his childhood room in the past 4 years.  His sister (Grace Gummer) is indifferent to him back as well as she has her buddy to go back and forth with.  His father (Kevin Dunn) is a different story as he constantly has an “I told you so” look on his face, and constantly tells him he needs to go and get a real job at the post office. 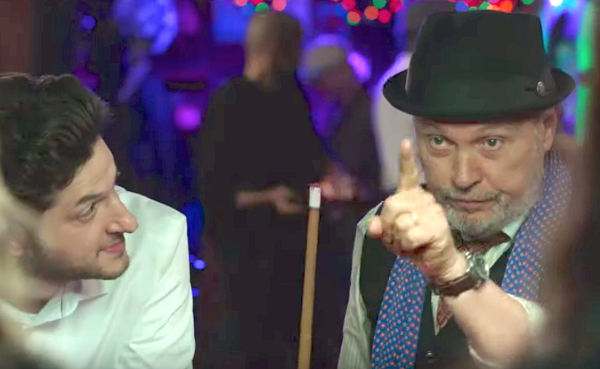 Scott frequents his local bar reconnecting with his friend where he runs into Marty (Billy Crystal).  Marty seems to be the local drunk.  He pleads with the bartender for his turn at karaoke, he’s belligerent, he even urinates in the sink as the stalls are busy, and then blames Scott when the bartender goes to kick him out.  And that my friends, is how you start a beautiful friendship!  Through their bathroom encounter, Marty observes Scott’s stress-induced hives and recommends the town dermatologist to treat it.  The next day Scott goes to the office to find Marty is his new doctor.  After a serious HIPPA violation, the two hit it off as they continue to run into each other.

Usually, a film about a guy returning to his hometown is about him connecting with the girl who got away, and in a sense, it is as Scott pines for his old girlfriends he left behind (Eloise Mumford), but the real relationship in Standing Up, Falling Down is about his newfound bromance with Marty.  While they become friends, it’s also a weird father/son dynamic between two broken people.  Scott’s life imploded with his failed stand up career as he has to pick up the pieces and Marty is nursing his wounds through endless drinking following the death of his wife and his son who blames him for her death.  Both are broken, and both help put each other back to a better version of themselves.

The chemistry between Billy Crystal and Ben Schwartz is pitch-perfect.  Even from their first encounter, they feel like two lost souls who finally found each other.  There’s a moment where the two of them smoke marijuana after a night of drinking that is perfect acting between the two of them as they are both hilarious and enduring, especially when they get stopped by Scott’s sister’s security guard boyfriend (David Castañeda) and he joins in the comedic magic.  After all, “Ruis is awesome,” as per Scott’s father.

While the screenplay is by Peter Hoare, it really feels as though the two comedic actors did a great deal of comedic improv as they run off each other constantly throughout the movie rather effortlessly.  Speaking of Billy Crystal, he delivers one hell of a performance and reminds you once again why he’s one of the best in the business!  He’s funny when he needs to be, and quickly turns tragically sympathetic at the drop of a hat.  If this was a November/December theatrical release, there surely would be awards considerations for his performance.  Standing Up, Falling Down is almost broken down in two parts, an interesting choice by Ratner.  The first is much more comedic than the second act which allows the characters to delve down into their self-pity and remorse.  The film feels formulaic as the ending is somewhat telegraphed, but there are some great payoffs that reward the viewer for participating in the journey between the two characters.