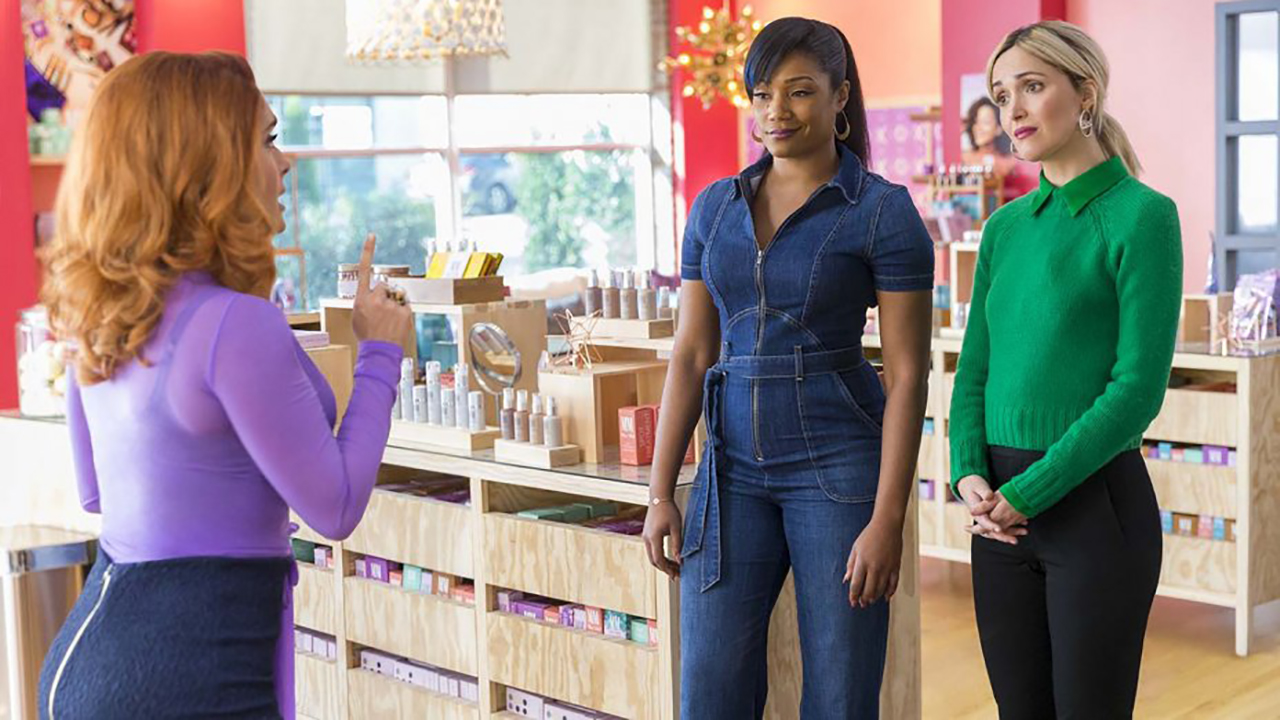 “We are two badass queens, like those bitches who raised Wonder Woman.”

If that line, delivered with swerve by Tiffany Haddish, already gets on your nerves then chances are you’re going to hate Like a Boss. The film, which pairs Haddish up with the equally-funny Rose Byrne as best friends Mia and Mel, owners of a struggling beauty company, is the sort of formulaic, obnoxious buddy comedy that guys have owned for so long we still feel the need to make a big deal of it when women do it. It’s silly, the characters are cartoonish, and any conflicts don’t take more than a few minutes to wrap up. What do you want? It’s January, and only runs for 83 minutes.

The good news is that Like a Boss has a fair share of laughs, thanks to Haddish and Byrne who lead a supremely talented cast who make the most of the thin material they have to work with. The story finds Mia and Mel at odds with corporate snake Claire Luna, played by a gigantor-breasted, orange-haired Salma Hayek, described hilariously as an “angry carrot”. With their company in loads of debt, Mia and Mel agree to let Luna, a cosmetics industry titan, invest in their company and save the day. It comes with a price, however. Luna’s 49% ownership increases to 51% if Mia and Mel’s friendship crumbles, because Luna doesn’t believe friends can be business partners.

As you probably guessed, Luna then does everything in her power to manipulate the friends into hating one another, which sounds like one of those spiteful Katherine Heigl comedies from the 2000s. Y’know, the ones where women try to destroy one another and tear each other down, usually over some guy? But Like a Boss deserves credit for not going too far down that route. While cracks do form in the friendship, as money is wont to cause, it always comes back to what Mia and Mel mean to one another. Love and loyalty are always there in the forefront, even when atrocious lines like this are being spouted every couple of minutes…

“Like a thermometer before you put it up your butt”

As many jokes land as ones that don’t, but you can’t hate on the cast doing their best to make it work. At this point you either dig Haddish’s brash attitude or you don’t. She’s dialed up pretty high on the nasty-meter here, but not quite on a Girls’ Trip level. She gels with Byrne as the outwardly calm, inwardly savage Mel, whose business savvy has her willing to risk all to meet Luna’s ridiculous demands. Hayek’s megalomaniacal act grows tiresome pretty quick; less of her would’ve accomplished much more.

The scene-stealer is Billy Porter as Barrett, Mia and Mel’s flamboyant and talented employee. If you’ve seen the trailer you have to remember his “witness my tragic moment” line, and it’s thankfully not ruined when taken in full context. It’s a lot funnier, actually. Jennifer Coolidge is…well, she’s Jennifer Coolidge. She’s been playing the same loopy character for years and that’s not going to change.  Me being an Ari Graynor superfan I would’ve appreciated seeing more of her, but she’s good in support alongside Natasha Rothwell, Jessica St. Clair, and Karan Soni.

A strong foundation of chemistry is what Like a Boss is built on and keeps it from being in need of a total makeover.