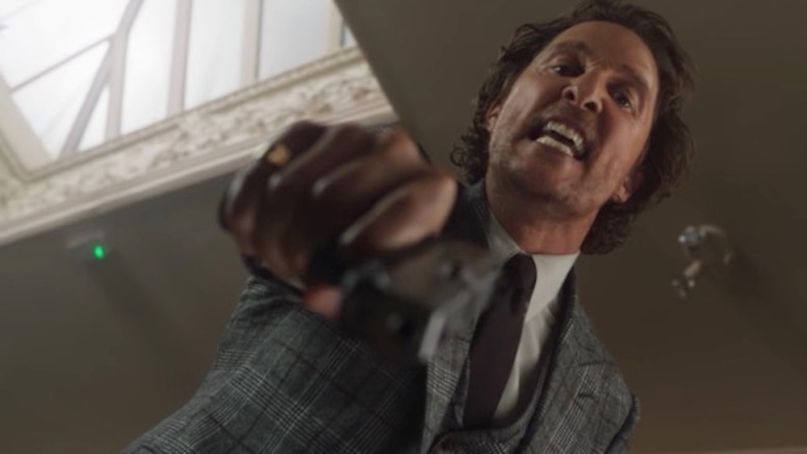 The Gentlemen –
Guy Ritchie’s newest star-studded affair – follows Mickey Pearson (Matthew
McConaughey) who has built a marijuana empire throughout London. A Rhodes scholar
originally from the United States, Mickey has worked hard to establish himself
as the king of the jungle when it comes to marijuana in London – a position of
power that he is incredibly proud of. That said, no lion can rule forever, and
he is ready to pass along control of his empire to the right bidder and enjoy
the fruits of his labor with his wife Rosalind (Michelle Dockery).

In comes Matthew (Jeremy Strong), another United States
native who is willing to spend a cool 400 million pounds on Mickey’s empire –
including the growing sites, distribution centers, and technology involved. Mickey
takes Matthew around, showing him different parts of the business – but makes
sure to have his trusty companion Ray (Charlie Hunnam) by his side to protect him.
Ray is constantly putting out fires for Mickey – whether it be dealing with a con artist named Fletcher (Hugh Grant, yes…that Hugh Grant) trying to
blackmail Mickey into paying him 20 million pounds or having a boxing trainer
named Coach (Colin Farrell) take care of some business for him to make up for
past discretions – Ray just tries to make Mickey’s life easier.

Mickey must find a way to balance pressures from Dry Eye, a
sale to Matthew, protecting his empire and family, and Big
Dave (Eddie Marsan) – a reporter who has it out for Mickey after an unfortunate
hand-shaking incident. I know that kind of sounds like a weird dream someone
would have, but hey – it’s Guy Ritchie.

The Gentlemen is
classic Guy Ritchie and with his fingerprints all over it – he wrote, directed
and produced the film – you should expect nothing else. The cinematography, the
witty one liners, the outlandish characters that walk around in broad daylight
doing whatever the hell they went, and the quick cutscenes – it’s all there.

There are films where the cast look like they are having a
hell of a good time and this enthusiasm for their roles shines through – well The Gentlemen is a perfect example of
that. All the starts throughout the film truly bring their A game and it just
makes for an even more enjoyable experience for the audience and cast alike.

There are times, especially towards the beginning of the
film, when things get a little muddled. It can be a bit hard to follow and
doesn’t truly establish a coherent plot – good thing there is enough humor and
action to get the audience through that. Once it hits its rhythm, The Gentlemen starts firing on all cylinders.
It is a fun ride and one that I will certainly be seeing again – I know
there are jokes in there that I missed the first time. We were all itching for
Ritchie to get back to his roots with another British gangster comedy and The Gentlemen scratches that itch
perfectly. Go ahead and check it out, you won’t be disappointed – and if you
are, take it up with Ray.
Rating: 4 out of 5