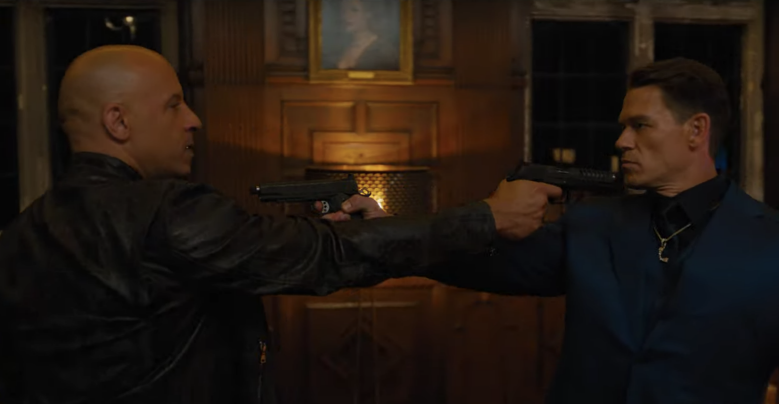 I am NOT okay with this new trailer for F9!  *deep breath*

The ninth chapter in the epic Fast & Furious franchise, which has recently expanded with a Hobbs & Shaw spinoff and an animated series, has taken longer than others to get off the ground. After the middling response to Fate of the Furious, a little extra time was given not only to make room for the spinoff but to develop an even bigger story. And it looks like they’ve done that, while in the process rewriting one of the most tragic moments in the series’ long history. Again.

Vin Diesel returns as Dom Toretto, which you already knew, but the twist here is that new addition to the cast, John Cena, isn’t playing just some ordinary villain. He’s Dom’s younger brother, one who appears to be just as strong, just as crazy, just as fast, and just as dangerous. We even see him being encouraged to kill Dom by the prior movie’s villain, Cypher, played by a returning Charlize Theron.

The usual insanity ensues, with the team racing up crumbling bridges and even taking on a stealth magnet plane (!?!?) which I can only guess is a stepping stone on the path to outer space.

But the biggest surprise comes at the very end, when the long thought-deceased Han (Sung Kang) comes striding into their HQ (why do they have an HQ???), ever-present bag of chips in hand, and acts as if we haven’t seen him die twice already: once in Fast & Furious: Tokyo Drift, and then in a retooled version of that moment in Fast & Furious 6.

Han has always been my favorite character, and I’ve hated how easily Jason Statham’s Deckard Shaw has been forgiven for killing him. The cries of “Justice for Han” appear to have been answered, but there’s no way this happens without it being some clunky bullshit.

Directed by a returning Justin Lin, F9: The Fast Saga opens on May 22nd!