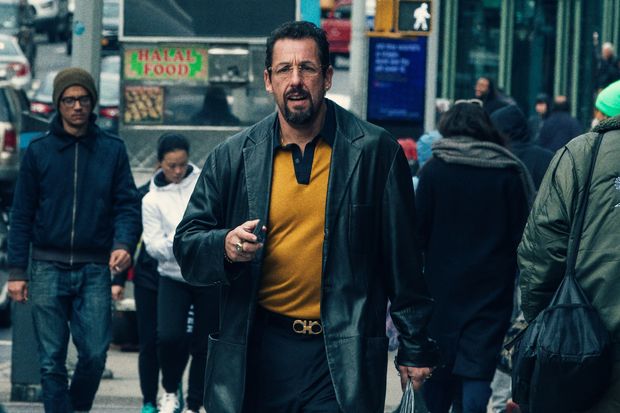 Okay, we can officially retire Punch Drunk Love as the oft-cited example of Adam Sandler’s competence as an actor. Sandler is a kinetic force in the Safdie Brothers’ wild, breakneck thriller Uncut Gems, a film that races at such a pace, continually raising the stakes to absurd degrees it might be too much for the weak of heart. And Sandler’s the guy thriving in the middle of this raging hurricane, delivering the best performance of his career and making it look damned easy.

The Gambler for a new generation, that classic film doesn’t conjure up a fraction of the desperation and anxiety created by Uncut Gems.. Set in the New York City diamond district, Sandler plays Howard Ratner, a guy who…frankly, it’s really tough to feel sorry for. Howard is that guy you know who just can’t keep his mouth shut, he’s always in some kind of trouble, usually of his own making. Howard may own a jewelry shop, one frequented by NBA stars such as Kevin Garnett, but he’s really just another guy up to his eyeballs in debt. There’s scarcely a person in Howard’s chaotic existence that he isn’t in hock to, and something’s got to give.

Claustrophobic cinematography crams us into Howard’s shrinking world, and we walk practically in his footsteps through every moment, every risk, every inexcusable high-risk decision.  EVERY decision Howard makes is terrible, by the way, as if he’s trying to make his situation worse. It can be exhausting, even when Howard seems to have found a way out, because we quickly learn there is no such thing for a guy like him. His ticket out of this seemingly endless cycle of vigs, threats, hustles, and side-bets is a rare black opal diamond acquired from Ethiopia, literally dug out of the earth by poor miners in a sequence that looks like the beginning of an Indiana Jones movie. Supposedly worth millions, Howard intends to auction the jewel off and strike it rich. But of course, nothing is so simple. Garnett enters the shop, thanks to Howard’s associate Demany (Lakeith Stanfield), and becomes entranced by the diamond’s mystical qualities. He asks to borrow it, just for one game, believing it to be an inspiration. Howard…well, he’s just not a smart guy. He makes the absolute worst decision possible, especially with guy around every corner who want their money and are willing to do terrible things to get it.

As if the streets weren’t punishing enough, the Safdies go even deeper and darker when exploring Howard’s personal life. Even at home Howard is living one big con. His marriage to Dinah (Idina Menzel) has been on the rocks for ages, and although they’ve agreed to divorce they’ve yet to let the kids know. Even Howard’s brother-in-law Arno (played by a menacing Eric Bogosian) is after him, and with a pair of mobbed-up goons at his side, too.  And of course, Howard has a side-chick (Julia Fox) as if the pressure wasn’t mounting quite enough. All of this ratchets up in ways that are both hysterically pathetic. When a school function for Howard’s daughter ends with him naked and locked inside of a car trunk, you think that would be rock bottom…even though you know deep inside that it isn’t.

A trailblazing examination of greed at its most toxic, Uncut Gems is also about a guy who is willing to do anything to carve out his slice of the American Dream. Howard risks everything to make his mark, and at times you can almost respect him for always betting on himself to come out on top. Set to an electric soundtrack and the Safdies’ dizzying direction, this is a film that will test your mettle like few others do. Somehow more intense than Good Time and twice as haywire, Uncut Gems reveals the Safdies to be filmmakers who revel in the anarchy they cause, and invite others to revel in it right along with them.