By now you’ve likely heard the rave reviews buzzing for Waves, the third feature film from writer/director Trey Edward Shults. His career took off with the family drama Krisha, followed by the horror It Comes at Night, and Waves follows a pattern of following families in a unique state of crisis. This particular story is one that has been coalescing in his mind for years, even before his breakthrough debut, and all it took was the right timing, the right situation, and the right people to bring it together. 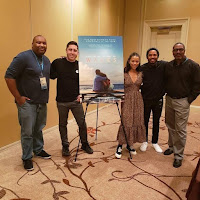 Two of those people who were integral to making Waves a reality are its two youngest stars: the red-hot Kelvin Harrison Jr., who worked with Shults on It Comes at Night, and Taylor Russell, whose career is also taking. They star as siblings in a black South Florida family who feel the unique pressures that come with being successful people of color. When that pressure becomes too much for one to handle, it leads to a tragedy that threatens to tear the family apart.
Alongside my colleague Tim Gordon at the Middleburg Film Festival, I had the chance to talk with Shults, Harrison, and Russell about Waves, and the very personal chord it struck with each of them.  You can listen to the interview below, and check out my review of Waves here. The film is in theaters now and expanding nationwide.