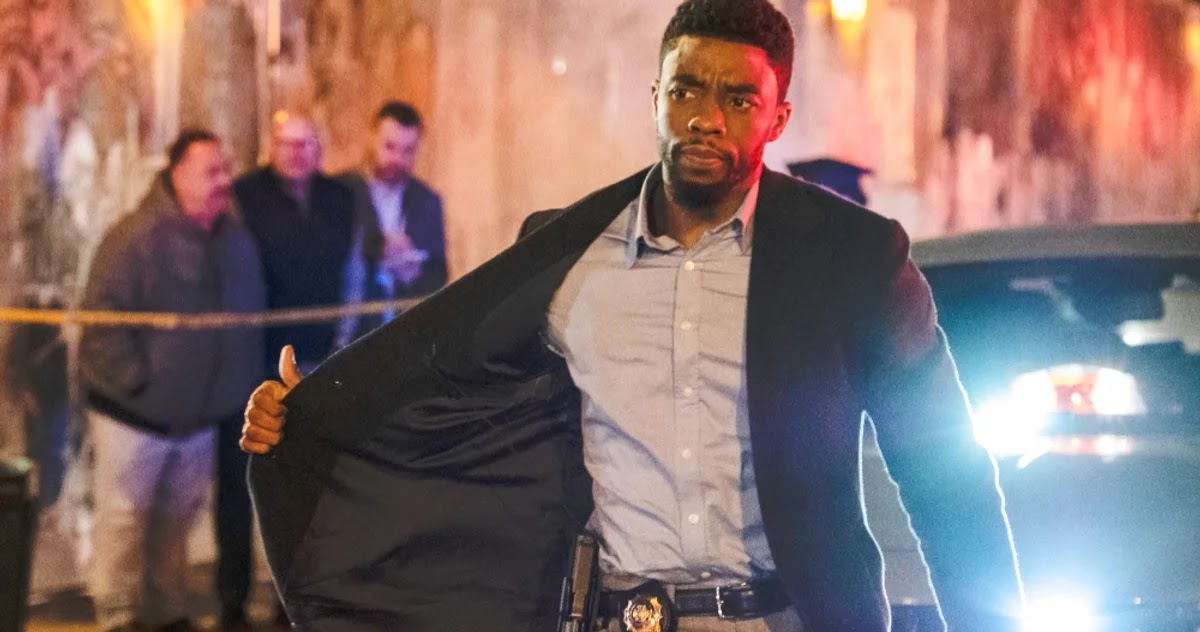 You could count 21 ways in which cop thriller 21 Bridges looks like a thousand similar movies: dirty cops, stolen drug money, political corruption, rebellious lead detective…it’s all there. But all you really need is one reason why the film holds up better than it should and that’s Chadwick Boseman in his grittiest, tougher-than-leather role yet. He stomps his way through New York City with a massive chip on his shoulder and we can’t help but want someone to dare and knock it off.

Boseman plays gunslinging NYPD detective Andre Davis, who we know is a rebel right from the beginning. We’re literally introduced to him as he’s being interrogated by Internal Affairs for a history of shooting nearly a dozen bad guys. Andre has his own moral code to live by, one forged two decades earlier when his father, a respected police officer, was murdered in the line of duty. Now Andre is constantly on the search for justice, doing whatever it takes to achieve it.

That makes him the perfect bloodhound to sniff out Ray (Taylor Kitsch) and Michael (Stephan James), a pair of small-time criminals looking for a big drug score. What they find is a stash of coke too big for them to handle, and when the police suddenly arrive it leads to shootout that ends with eight officers murdered. Andre may be considered a loose cannon by some, but he isn’t stupid. He knows his fellow officers will be looking for revenge, the mayor wants to kick this up to the feds immediately, and those two killers are going to have a tough time getting out of the city alive. The best way to do that is lockdown all of Manhattan, shut down every bridge leading in and out, block off the tunnels, guard the seaports, and find the killers before morning traffic. No mayor in the history of the world would approve that, but it makes for a pretty nifty premise and a very cool visual as the NYPD races to shut the city down.

21 Bridges may be familiar, but the ticking clock scenario it presents is a real barnburner. Directed by Game of Thrones vet Brian Kirk, the action sequences have sizzle, in particular a foot chase through the New York subway system that’ll have you forgetting much of the film was shot in Philadelphia. Violence is at a high, with Kitch’s hardened killer never more than a few minutes away from gunning somebody down. The same goes for the trigger-happy NYPD officers who are always standing in Andre’s way.

Avengers: Endgame directors Joe & Anthony Russo’s names have been all over this one, and for good reason. It’s their first major project as producers outside of Marvel, and bringing in Boseman was a smart decision. The Black Panther star projects authority and level-headedness. While other characters in the film try to label him as a hothead, his cool is what stands out amidst the chaos. Unfortunately, Boseman is surrounded by a talented supporting cast (JK Simmons, Sienna Miller, Keith David) who aren’t given a lot to work with. Adam Mervis and Matthew Michael Carnahan’s screenplay sucks the air out of the conspiracy Andre is ensnared in. The good guys and bad guys are so obvious it’s surprising they weren’t wearing white or black uniforms to identify themselves. Events unfold at a strangely accelerated pace. The killers are uncovered and cornered before too long, making the whole “lockdown” aspect seem kinda pointless, only to give way to a reveal that we all can see coming as far away as New Jersey.

Then again, I suspect not many people are going to 21 Bridges to be surprised, but to watch Boseman be the law. If that’s what you’re in for, you won’t leave disappointed. The simple truth is that movies like this have largely been relegated to VOD or Bluray release when they used to be a major part of the multiplex experience.  You have the Russos and Boseman to thank for turning that around, at least for now.