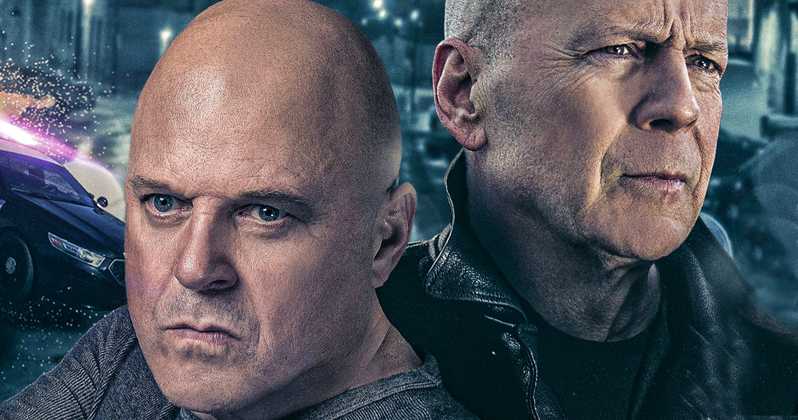 If any of you have been patiently waiting for both Michael
Chiklis and Bruce Willis to grace the big screen together than 10 Minutes
Gone scratches that itch! Rex (Willis) is a wealthy crime lord that has employed
his most trusted team of crooks, led by Frank (Chiklis), to rob a bank. There is
a very valuable lock box containing jewels at this particular branch that Rex
has his eyes on, so he had to send in the best of the best. Joining Frank is Baxter
(Swen Temmel), Marshall (Sergio Rizzuot), Ricky (Frankie Delgado), and Frank’s
brother Joe (Tyler Jon Olson). Joe is renowned for bringing bad luck, but Frank
vouches for him and that is enough to get him on the team. The group has meticulously
planned for everything and are well-prepared for this quick in-and-out job.
Well it seems that Joe’s reputation is well deserved as the shit hits the fan.
Frank gets knocked out for…about 10 minutes that are now gone (see what they
did there?) and when he wakes up the jewels are gone, and Joe has been killed.
Frank goes on a quest to figure out who backstabbed him, protect Joe’s girlfriend
Claire (Meadow Williams), and try and clear his name – all while Rex’s hired
hitwoman Ivory (Lydia Hull) is on his trail. Now that is one busy afternoon for
Chiklis! 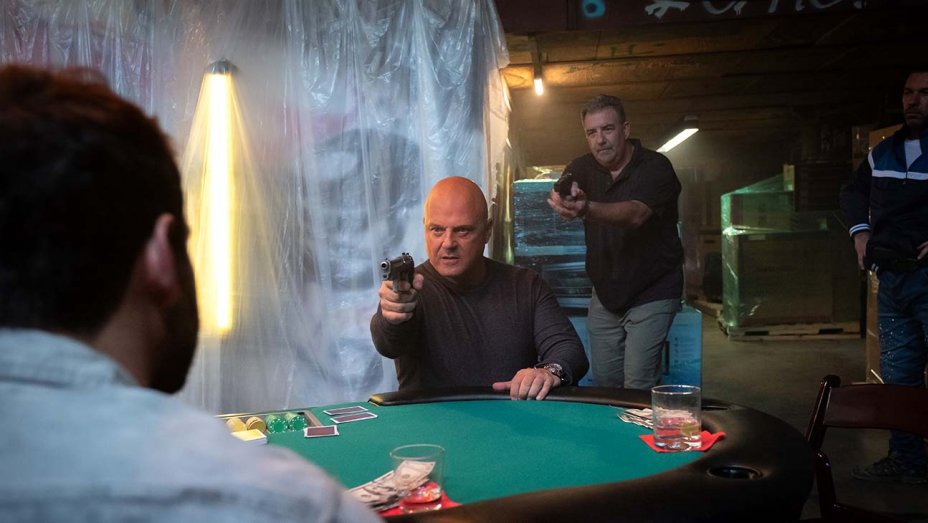 10 Minutes Gone is cliché, formulaic, and it most
likely should take you less than 10 minutes to figure out the twist. That being
said, it has some decently entertaining moments during its short runtime. As
Frank tracks down the members of his squad we get to see flashbacks of the
robbery taking place from each of their perspectives. Sure this may have been
done in other films, but I still enjoyed director Brian A. Miller’s decision to
frame the robbery in this manner. The shooting scenes that happen throughout
the film are utterly ridiculous and reminded me of the reckless abandon that I sometimes
find myself playing Red Dead Redemption in – just run into the middle of a gun
fight and shoot knowing that I’ll probably kill everyone I need to before I
die. Either that or the police that are called to the scene have had the least
firearms training possible. There are action sequences in 10 Minutes Gone
where characters are literally just standing in the open shooting at officers
surrounding them, and somehow not getting shot (or even barely shot at!) – and
it eventually just becomes plain silly. Other times gun fights feature two people running away from each other while shooting blindly behind them.
Needless to say, 10 Minutes Gone could use a serious upgrade to those action scenes. The other thing that really stuck out at me was the lack of emotion,
pretty much across the board. Regardless of the shocking news that characters find
out about throughout the film, we essentially only get stone-faced reactions. As
much as I love Willis and Chiklis, 10 Minutes Gone is one you won’t
regret skipping – BUT if you have 90ish minutes to kill and absolutely nothing
to do, there are worse films you could put on.
Rating 1.5 out of 5