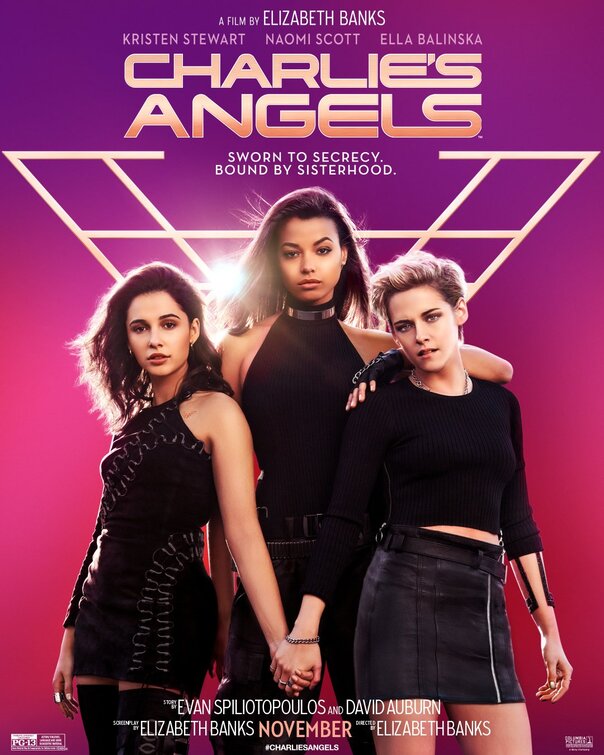 If you’re a fan of the previous Charlie’s Angels reboot, and I am definitely one (I’m a fan of anything Drew Barrymore), don’t go into this new film expecting more of the same. First of all, the trio of Angels is vastly different and led by Kristen Stewart, Ella Balinska, and Naomi Scott. Second, as seen in the newly-released full trailer, these ladies are here to outfight and outwit their foes on a global scale. Plus, there isn’t a Tom Green sighting anywhere, thank goodness.

Another thing you might notice is that it’s not playing up these women as sexual objects. The focus is on the action, which is directed by Elizabeth Banks. She also takes a co-starring role in the film as a Bosley, joined by Patrick Stewart and Djimon Hounsou. Bosley is still a mentor and guide to the Angels, but now there are multiple Bosleys as the team operates as just one part of a worldwide network.

Also in the cast are Sam Claflin, Noah Centineo, Luis Gerardo Mendez, and Nat Faxon, with Jonathan Tucker as one of the movie’s villains. Just as the previous movies were set in the same universe as the 1970s TV series, this one is seen as a continuation so don’t be surprised if we get cameos from previous Angels.

SYNOPSIS: Reboot of the 2000 action comedy based on the 1970s television series. A new generation of private detectives working for the mysterious Charlie.


Charlie’s Angels hits theaters on November 15th.  Check out the trailer below, followed by soundtrack details from Ariana Grande. Her music features heavily along with tracks by Lana Del Rey, Miley Cyrus, and more.