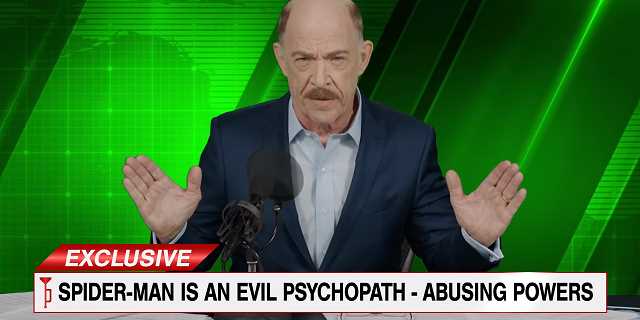 Spider-Man returning to Sony Pictures has left any leftover storylines from Spider-Man: Far from Home up in the air, but for now at least Sony is giving us more of JK Simmons as J. Jonah Jameson. Simmons, who played the anti-Spiderman journalist in Sam Raimi’s trilogy, returned to the role during Far from Home’s mid-credits scene, exciting fans at having him back. And now in celebration of the movie’s arrival on Bluray/DVD, Sony has launched TheDailyBugle.net.

The new version of Jameson is a conspiracy theorist and face of TheDailyBugle.net, making waves for his story on the death of the “heroic” Mysterio at the hands of Spider-Man, who is then outed as Peter Parker. If you go to the functional version of the website you’ll find tabloid stories on Night-Monkey, Hydro-Man, and more.  What’s interesting about that is Hydro-Man, aka Morris Bench, is really an illusion of one of the powerful Elementals. Bench isn’t even in the movie. Are they teasing him for the future, or what?
It’s a silly piece of marketing but I hope it means Simmons is sticking around for more movies with Tom Holland’s Peter Parker. I have to believe Sony would’ve scrapped this if there weren’t plans to keep Jameson harassing Spider-Man in the upcoming film.