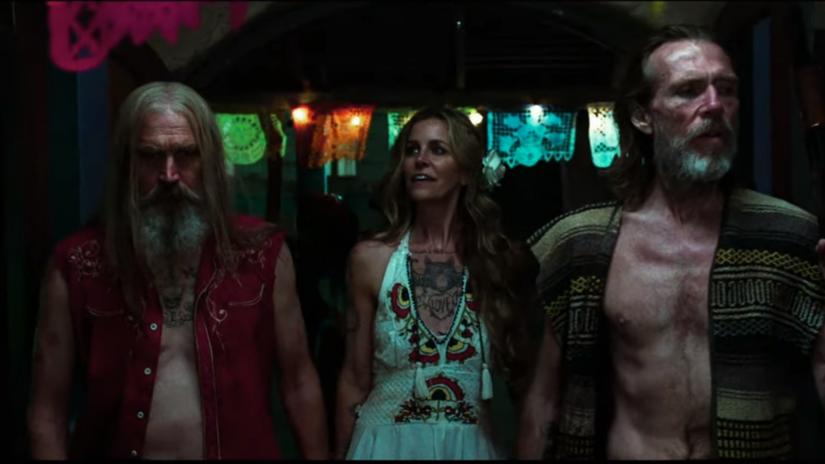 You’re not going to find most Rob Zombie movies at the Sundance Film Festival. Any notion of emulating the recent wave of critically-acclaimed arthouse horrors gets butchered and buried in the sand with Zombie’s latest, 3 From Hell, a sickeningly exhilarating “finale” to his trilogy that began 16 years ago with House of 1000 Corpses and its sequel, The Devil’s Rejects.

If you’re a fan of the Firefly Family, thought to have gone out in a “Freebird”-scored blaze of glory at the end of The Devil’s Rejects, then chances are you’ve already got a ticket to see their miraculous return. Like any number of seemingly immortal slashers, the psychotic trio have survived certain death, despite the “million to one odds”, and have become media celebrities ala Charles Manson, a clear influence on Zombie in his creation of this murderous brood.  The Manson-esque Otis Driftwood (Bill Moseley), ethereal wacko Baby Firefly (Sheri Moon Zombie), and insane clown Capt. Spaulding (Sid Haig) are tried, convicted, and imprisoned for literally dozens of murders. As if any prison could keep them from yet another killing spree. While their delusional supporters should “Fuck the Man!!!” to TV crews, the Fireflies are causing havoc and engineering their own escape.

As most of our readers know, horror movies aren’t really my bag, but villains are. While ‘1000 Corpses‘ was just another stylish Texas Chainsaw Massacre ripoff, it was Zombie’s fascination with the killer clan that set it apart. Without softening them into lame antiheroes, Zombie instead indulged fully into their immorality with The Devil’s Rejects, and now with 3 From Hell he has them butchering the American Dream at every turn. The home of the free? They refuse to live any other way; free to fight, fuck, and kill whoever they want, which happens with untold gore and brutality. Innocent and not-so-innocent, man and woman alike see either the sharp edge of a knife or worse. There’s always worse. Zombie’s still one twisted motherfucker. Just ask Clint Howard (yes, Ron Howard’s punchline of a bro), who plays a silly clown named Mr. Baggy Britches who shows up, randomly as shit, to a dinner party that goes south quickly.

After taking out their aggression on a conceited prison warden and a torturous guard (played by genre icon Dee Wallace), Otis and Baby tear a bloody swath across the country, joined by equally mad, movie-quoting half-brother Winslow “Foxy” Coltrane (Richard Brake). Their journey ends up in a small Mexican town celebrating Dia de Muertos, like something out of Robert Rodriguez’s El Mariachi. A fine place for a final standoff if there ever was one. Don’t bother hoping for a respectful take on Mexican culture, though. You do get plenty of Mexican whores, one-eyed midgets, and squads revenge-seeking goons in luchadore masks. It’s a trip. You’ll laugh as much as gasp from the shock and horror of it all.

Most disturbing is how easily it is to get wrapped up in, and even cheer on, the Firefly bloodbath. But damned if they aren’t kinda fun to watch, even as they take the whole “live free” mantra to a disgusting level. With their canned dialogue ripped out of a Tarantino movie and Leone-influenced gunfights, they’re never boring to watch even if it turns your stomach to root for them. Zombie and cinematographer David Daniels employ a number of trippy effects and quick cuts to capture that spiral you down a deadly rabbit hole where murder is as much a holy experience as prayer. Not that Zombie’s particularly subtle about it, frequently zipping to an image of Jesus while the most vile of all sins is being committed.  Not that anybody goes to a Rob Zombie movie for nuance, or to see him do anything different. Visually, Zombie continues to coast by on what he learned from his music videos. It works, but can’t prevent repetitiveness from setting in.

3 From Hell will be vile and wholly unacceptable to most, but for Zombie’s die-hard fans it’s the symphony of carnage they’ve come to expect and will miss if this is truly the Firefly’s last ride.