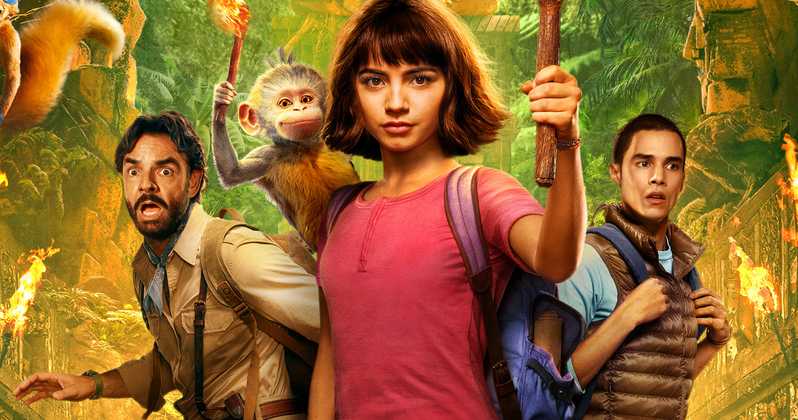 Good luck getting the childish but catchy theme out of your head after the opening moments of Dora and the Lost City of Gold. Done in live-action style and not in the simple animation of Nickelodeon’s educational cartoon, we’re treated to a six-year-old Dora and her favorite cousin Diego on a crazy jungle adventure. She’s got her talking backpack, her monkey pal Boots, and a jeep roaring through the wild as that pesky thieving fox Swiper nips at their heels. It’s all the stuff of Dora’s great imagination, though, and despite her parents (Michael Pena and Eva Longoria) hoping ‘ “She’ll grow out of it”, that childlike wonder never goes away.

When the decision was made to age up Dora for this live-action film, casting Transformers: The Last Knight and Sicario 2‘s Isabela Moner as the now-teenaged explorer, it didn’t make a lot of sense. Who is the movie for, exactly? Kids who grew up with the cartoon probably too old for it, while those who never watched it probably don’t care. In truth, I think director James Bobin and screenwriter Nick Stoller, who previously worked wonders on 2011’s The Muppets, wrestle with that throughout much of the film. But when they settle into the film’s straight-up bizarre nature, that’s when Dora hits its stride.

If there’s such a thing as a jungle fish-out-of-water, Dora would be it as she’s shipped off to Los Angeles to mingle with kids from the city rather than a footwear-sporting monkey. At least she’ll have Diego (Jeff Wahlberg) around, and of course he’ll be the same partner in crime he was as a kid. Well…not so much. Diego is embarrassed by his cousin, who everyone nicknames “Dorka”, and tries to avoid her as much as possible. She’s hopeless; too trusting for a snake pit like high school, but fortunately (?) for her, Diego, brainiac frenemy Sammy (Madeleine Madden), and socially awkward Randy (Nicholas Coombe) are kidnapped and sent to Peru by mercenaries in search of her parents who are off in search of a long-lost Incan city.

Back in her element, Dora easily proves that the jungle is nothing compared to the ravages of high school life. The dangers she and her friends face aren’t too threatening, but that’s not really the point. Dora the Explorer was always about a girl who just loves to explore and learn new things, and every opportunity is taken for a new lesson to be taught. Many of the animated show’s quirks are embraced to maintain that educational feel, even if they come off as totally strange when acted out by teenaged girl. Dora breaks out into song to help her friends get through dangerous situations or complete embarrassing tasks (enjoy “The Poo Song”, parents), and she’s always imparting one factoid or another on her colleagues or the audience. This runs her afoul of Sammy who sees herself as the smart one of the group, but Dora at least has the better attitude about it.

Bobin taps into his Dora-like imagination to create a vision of the South American jungle straddling the realms of fantasy and fiction. It’s an unpredictable place where a kleptomaniac bandana-wearing fox named Swiper can be a constant obstacle. Swiper is voiced, oddly, by Benicio Del Toro who often sounds like someone just shoved a microphone in his face during lunch. There’s no mistaking Danny Trejo as the voice of Boots, but you won’t get to hear it as much as you’d like. Others in the cast have clearly embraced the film’s silliness. Pena barely gets through a scene in which his character doesn’t break out into tears, while Mexican superstar Eugenio Derbez goes way over-the-edge as a fearful friend of Dora’s parents. I also appreciate that Stoller’s script doesn’t diminish Dora’s Latinx heritage, but chooses to embrace it and the language.

But this movie relies on Moner and her ability to make Dora’s innocence believable as teenager. She comes across with much the same vigorous enthusiasm we used to see from Steve Irwin, and I think kids who may be introduced to Dora for the first time will want to see more. Mature audiences may find themselves chuckling at some of the subversive stuff kids may miss. A decidedly innocent psychedelic trip recalls the animated series and is one of the movie’s real comic highlights.  The film might’ve worked better if Dora was kept as a child, but at least they didn’t sex her up the way one critic seems to wish they had.

I’m not convinced the presence of Swiper and Boots really work in a live-action context. The film seems unsure whether we are supposed to accept them as real or not, and flip-flops on other such things frequently. A kid probably isn’t going to care about that, though, but an old guy like me can’t help but notice. Easy for the family to enjoy together, Dora and the Lost City of Gold is sweet, spirited, and a little bit odd just like its thrill-seeking heroine.