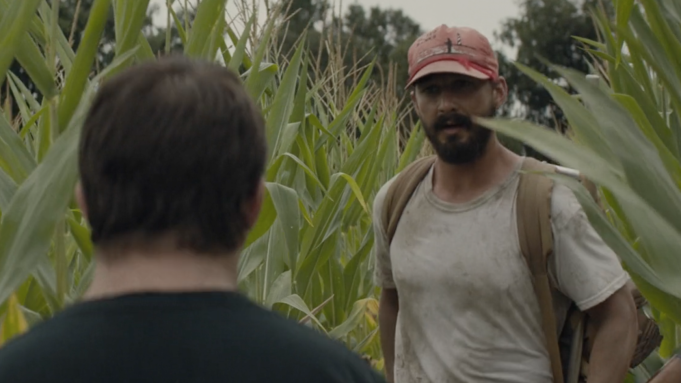 At a time when professional wrestling is bigger than ever (no matter how shitty WWE is right now), we’re seeing Hollywood take interest in a way we haven’t seen since the Rock ‘n Wrestling days. Earlier this year we had the biopic Fighting With My Family, which took the underdog story to the world of wrestling. And now we have the oddly-named The Peanut Butter Falcon, a coming-of-age adventure tale that was the surprise breakout at SXSW.

Marking the directorial debut of actor Tyler Nilson, joined by writer and co-director Michael Schwartz, the film is best summed up in its synopsis:
“‘The Peanut Butter Falcon’ tells the story of Zak (Zack Gottsagen), a young man with Down syndrome, who runs away from a residential nursing home to follow his dream of attending the professional wrestling school of his idol, The Salt Water Redneck (Thomas Haden Church).  A strange turn of events pairs him on the road with Tyler (LaBeouf), a small time outlaw on the run, who becomes Zak’s unlikely coach and ally. Together they wind through deltas, elude capture, drink whisky, find God, catch fish, and convince Eleanor (Johnson), a kind nursing home employee charged with Zak’s return, to join them on their journey.”

The film fits perfectly with Hollywood’s attempts at being more inclusive, casting an actor with Down syndrome to play Zak. Gottsagen’s performance has been praised, as well as Shia Labeouf as his road dog. The rest of the cast includes Dakota Johnson, Thomas Haden Church, Bruce Dern, John Hawkes, Jon Bernthal, and WWE fans can take note of appearances by legends Jake “The Snake” Roberts and Mick Foley.
The Peanut Butter Falcon opens August 9th.