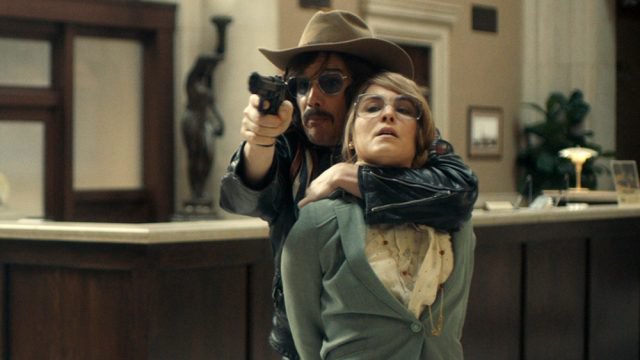 Maybe a reunion of Ethan Hawke and director Robert Budreau isn’t all that exciting to other folks, but to me it’s something I’ve been dying to see. The duo worked together before on the vastly underrated Chet Baker biopic, Born to be Blue, and now they’re back on something far different. If you’ve heard the term “Stockholm Syndrome” then you probably know it means a situation when a captive begins to sympathize with the captors. But what you may not know is the real-life bank robbery that first coined that phrase.

Stockholm is based on the 1973  Norrmalmstorg robbery in Stockholm, Sweden which was the first crime they ever carried on live TV, and the first time a psychologist coined the phrase “Stockholm Syndrome.”  Hawke plays Lars Nystrom, who posed as an American to rob the Kreitbank, and take hostages with the goal of attaining a $1M ransom and the freedom of his imprisoned friend. Noomi Rapace stars as one of the hostages who begins to grow comfortable with Lars and terrified of the potential violence in a police raid. Also in the cast are Mark Strong and Christopher Heyerdahl.

What I wasn’t expecting was how comical this looks, with Hawke really having a ball playing up the arrogant American aspect of his character, demanding with gusto for a “Mustang 302 like Steve McQueen had in Bullitt.” This looks like a lot of fun and I hope it gets a national rollout.

Stockholm hits NY and LA on April 12th with an expansion to follow.