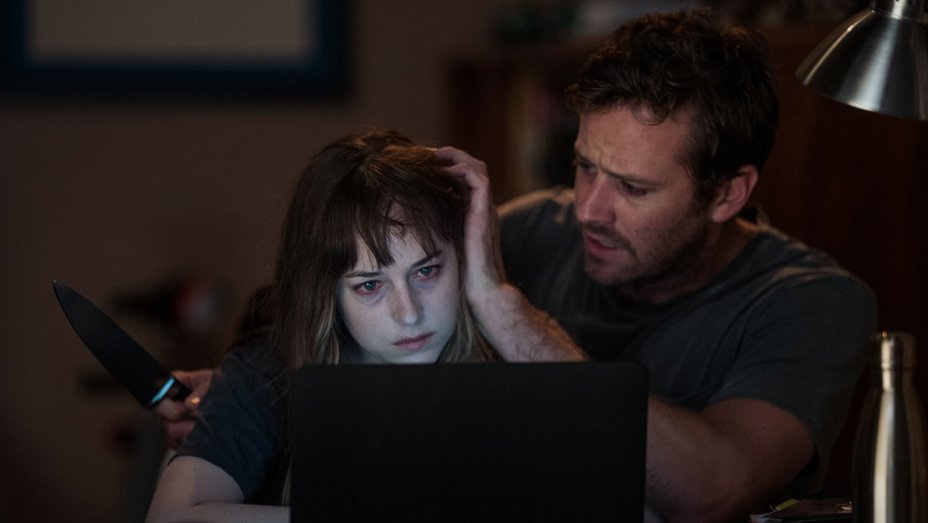 Well, my quest to finally end a Sundance with some positive vibes continues to go unfulfilled. Babak Anvari’s Wounds is exactly the kind of horror movie I hate, as it relies solely on a single vague idea and hope that’s enough to illicit scares. It isn’t, and despite the presence of actors Armie Hammer, Dakota Johnson, and Zazie Beetz, the film is laughably ludicrous and not for a good reason.

We’re talking about a movie that centers on a cursed cell phone. That’s right, cursed cell phone.  Going in, I had no idea this is what Wounds was about, and honestly, I was tickled when it became clear how dumb the central premise was. And the best part is how the whole thing started, as we’re introduced to Hammer’s New Orleans bartender, Will, a dude with a lot of issues. First of all, he’s an alcoholic working as a bartender. He’s still carrying a torch for his ex-gal, Alicia (Beetz), who shows up at the bar every night with her new guy (Karl Glusman), almost as if she’s rubbing it in Will’s face. Not that he seems to mind.  He’s also stupidly irresponsible. After allowing a group of underage students to drink in the bar, they witness a brutal fight involving Will’s war vet pal (Brad William Henke).  They jet before the cops arrive, but leave behind a cell phone with some seriously fucked up shit on it, like decapitated heads and other gory images. Will picks up the phone and keeps it for reasons that are never really clear, but he probably should’ve just turned it in at the nearest T-Mobile store.

The phone becomes the source of all Will’s problems…or maybe exacerbates those caused by his drinking and general untrustworthiness. His girlfriend Carrie finds it weird he’s holding on to the cell phone of “some chick at the bar”, for very good reason, but when she looks at it she sees all the disturbing stuff Will was trying to keep from her. Plus, he keeps getting weird messages on it, from someone begging for help. Soon, Carrie is sucked into some dark mental void while he sees images of death, cockroaches, and worse everywhere.

Anvari, who also wrote the script, creates a nightmare scenario in which reality is twisted into knots and nothing seems to make sense. I’m perfectly fine with that as long as there’s something substantial to base it on, but I need more than just flashing images of bugs, murder, and darkened tunnels. There’s little else to grasp on to, other than a seeming connection to Joseph Conrad’s book, Heart of Darkness, alluding to the emptiness of Will’s soul.

I’ll give it to Hammer, he brings with him big performances any time he’s at Sundance. Last year it was in the wildly over-the-top Sorry to Bother You, but at least that was in support of a film with a lot to say. In Wounds, he’s basically an arrogant prick who gets by on charm and good looks, but as he descends into madness all of his inhibitions fade. Hammer is the most interesting thing about Wounds, and certainly he’s better than the sleepy-eyed Johnson, who offers him nothing in return. Beetz fares much better as Alicia whose conflicting feelings for Will are the closest thing to human this movie has to offer. It’s just disappointing that her scenes with Hammer don’t amount to much in the long run, and you’ll often find yourself wondering what the point of some of the conversations were. They’re so transparently meaningless that the film can’t help but sway into unintentional comedy, and at the screening I attended laughs broke out when I’m sure Anvari would’ve preferred they not.

It’s likely that some will find Wounds enjoyably unnerving and grotesque, or perhaps so bad it’s entertaining. For me, it’s just a waste of some very talented people and another disappointing end to my time in Park City.