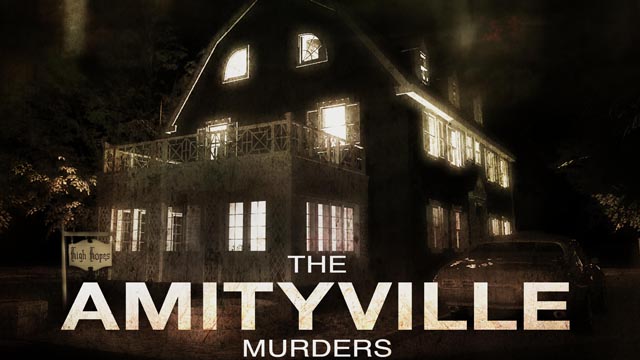 Coming to you thanks to the good folks at Collider

I’m usually ok with any sequels and reboots…if they suck you can just pretend it didn’t happen. That being said even I am starting to get a little worn on Amityville flicks. For those that don’t know the story Ronnie DeFeo murder his entire family with a rifle one night in the early 70’s. He claimed demonic voices told him to do it. Shortly after another family moved in and ran away 30 days later leaving all of their belongings behind with claims of demonic possession. This is where Ed and Lorraine Warren,  the “ghost hunters” on whom the Conjuring movies are based, broke into the public eye when they claimed that the house was legit haunted. Cue something like 24 movies later and here we are. While I’m almost positive one of the previous films tackled the original crime, Ronnie DeFeo’s familicide, most all covered the events of the families who moved in after . This is where The Amityville Murders is trying to stake its claim to being unique, the movie will present the events leading up to the unthinkable murders which included three children sleeping in their beds.

The trailer gives us a good feel for the atmosphere, which is legitimacy creepy, but that’s about it. The lack of any real names among the cast and the tagline referencing A Haunting in Conneticut, a pretty much forgettable movie that came out years ago, make me think this flick doesn’t have much else to offer. Check out the trailer below and judge for yourself!