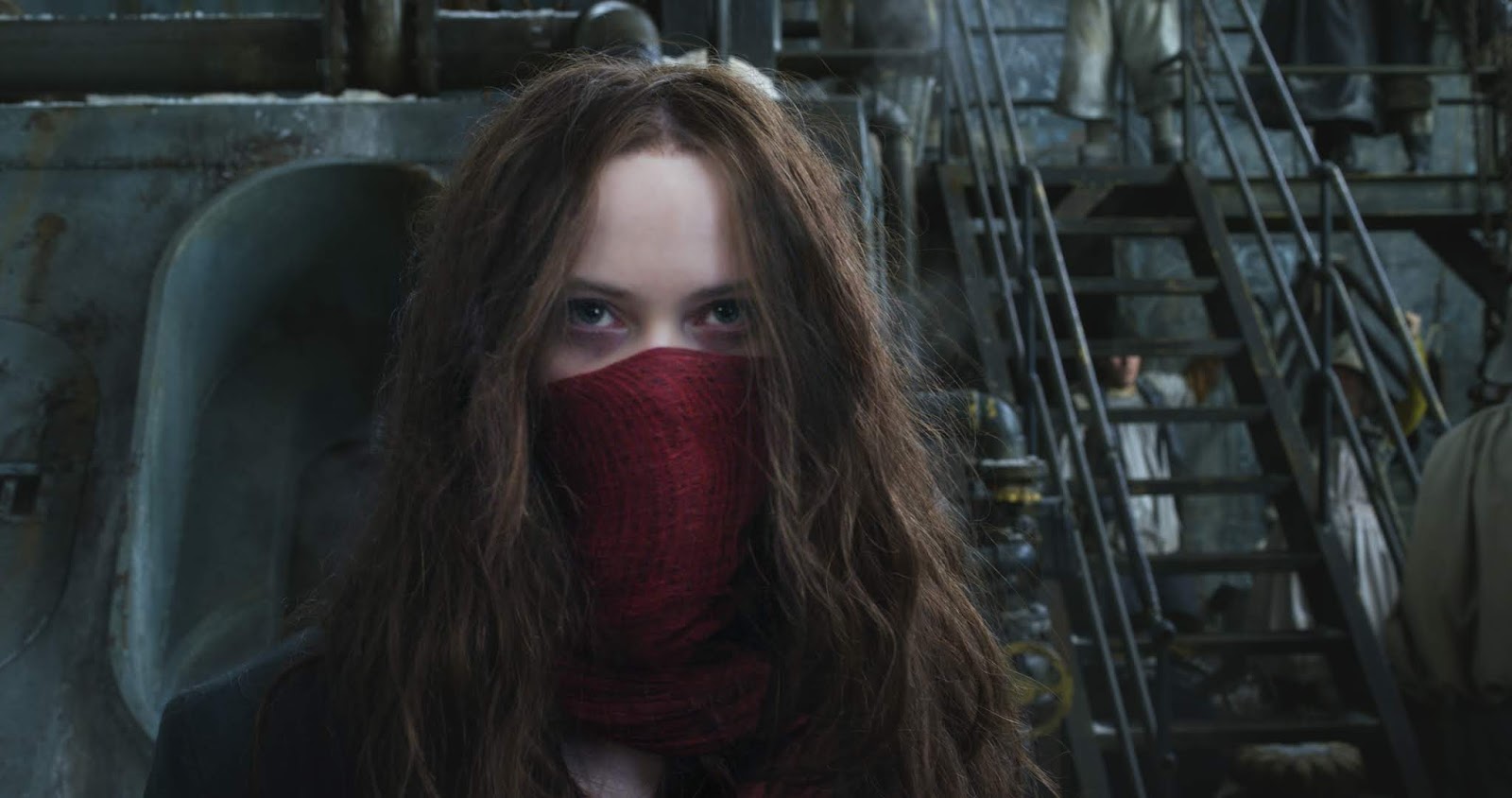 A lot of imagination went into building the post-apocalyptic steampunk world of Mortal Engines. In this bleak vision of the future, about 1000 years after a mega-weapon destroyed most of civilization, the world’s greatest nations essentially turned themselves into giant demolition derbys. Countries are now mobile, and the most powerful of them exist in giant tank-like structures with cities built atop them. They mow throw the terrain on giant treads, good for pulping smaller nations to secure what limited resources exist. It’s an insane concept dreamed up by author Philip Reeves and adapted by director Christian Rivers, with the help of producer and co-writer Peter Jackson. Mortal Engines is not boring to look at in the least, but none of that matters if the characters aren’t interesting enough to keep this juggernaut’s engine going.

London is the major powerhouse, rolling along in a massive, intimidating fortress. It houses thousands of rabid citizens who eagerly cheer the demise of their foes, like Arsenal fans going wild over a game-winning goal. The opening sequence is like something out of Death Race, as London, led by the obviously villainous Thaddeus Valentine (Hugo Weaving), turns a tiny mining town into pulp, absorbing its population into its own. On board is eager historian Tom (Robert Sheehan, too old for the role), who shares Thaddeus’ love of old relics. The museum he works at holds some clever commentary on today’s culture: the Minions are worshipped as deities, there’s a joke about texting that suggests a civilization in rapid decline. Little do Tom or Thaddeus know that also on board is the scarred Hester Shaw (Hera Hilmar), who makes an attempt on the latter’s life and very nearly succeeds. If only she had, because Tom wouldn’t have had to find out, too late as it turns out, that Thaddeus is every bit the murderous heel his name would suggest. Nobody with a name like Thaddeus Valentine is a good guy.

Sure, from the outside Mortal Engines looks like something out of Mad Max Beyond Thunderdome, but visually it’s hard to dispute the differences from every other YA adaptation out there. If only Rivers could have taken us inside more cities to see the many cultural differences within these armored structures. As it is we only get a look inside the warlike London and a glimpse at the Zen-like Asian nation…well, they’re pretty Zen until London starts zapping them with a giant purple Death Star laser. Mostly what we see are the muddy barrens, where Hester and Tom squabble, make up, reveal their troubled pasts, and make an effort to stop Thaddeus from repeating nuclear mistakes of the past. They’ll be captured by scavengers in an underground that moves like a centipede, and take up with a rag tag rebel group of pilots with the firepower to take out Thaddeus’ Death Star…er, weapon.

Icelandic actress Hera Hilmar is properly enigmatic as the vengeance-seeking Hester Shaw, although she gets absolutely no help from the dull-as-toast Sheehan. Hilmar’s been making quite a name for herself lately for her performances in The Ottoman Lieutenant and An Ordinary Man, and she takes full advantage of her first blockbuster-sized role. It’s just sad that the best chemistry she finds is with Shrike (Stephen Lang), an undead Terminator-esque soldier seeking vengeance of his own. Hugo Weaving’s bad guy act is so routine that you can’t help but snicker anytime a naïve character trusts him, even a little bit. The only other standout performance belongs to Asian rock star Jihae as the kickass rebel leader, Anna Fang. From the moment she arrives, wearing Matrix shades and looking like the only one who has had a shower in years, she demands our attention. Fortunately, she stays heavily involved all the way through the climactic battle, but even she isn’t enough to cover up the faults there.

Rivers hopes that an overdose of CGI will help the audience plow through a ton of expository dialogue and bland characters, and while it’s a decent distraction it simply isn’t enough. This becomes especially apparent during the final battle, which cribs liberally from the most iconic sci-fi action movies of all-time, ignoring all of the world-building we had just sat through. It doesn’t make any sense but I guess it’s “cool” the final battle looks like something out of Rogue One? There’s even a “Luke, I am your father” moment so blatant multiple people at the screening I attended were reciting it in-between chuckles.

Whatever Mortal Engines is trying to say about the threat of repeating sins of the past is lost in a story that is too convoluted, and delivered by characters too bland for us to care. But at least it looks incredible, and for a film that was clearly built for the IMAX experience it makes a good case for experiencing it in that way only.