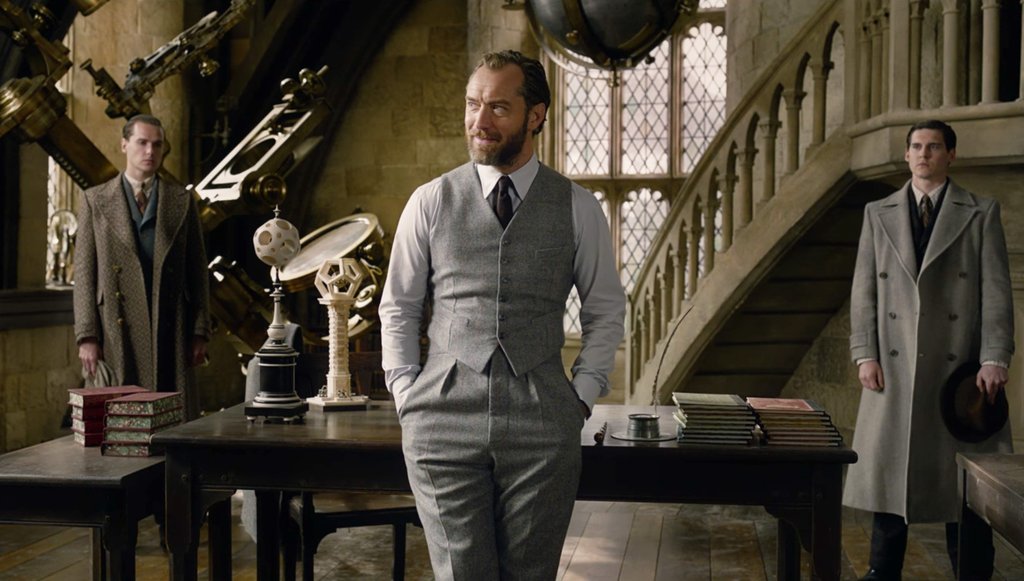 1. Fantastic Beasts: The Crimes Of Grindelwald (review)- $62.2M
It was a slightly smaller debut for Fantastic Beasts: The Crimes of Grindelwald. The $62M domestic haul trails the prior film’s $75M, but it’s doubtful Warner Bros. is too concerned…yet.  It’s overseas grosses that power blockbusters like this nowadays, and worldwide the Harry Potter prequel has $253.2M with $191M of that internationally. That’s a comparable number, and I suspect that’ll hold for the length of the franchise, which JK Rowling has said would be five movies long. I’m curious whether the casting of Johnny Depp had any impact domestically, though. There was real disgust by a lot of fans and I have to believe some of that crossed over to more casual viewers who refuse to support the actor. He hasn’t had a non-Jack Sparrow hit in ages, and films that have featured him prominently have all suffered. Could we see that role shift yet again (How about bringing Colin Farrell back??)
2. Dr. Seuss’ The Grinch– $38.1M/$126.5M
3. Bohemian Rhapsody– $15.7M/$127.8M
The international appeal of Queen continues to pay dividends, as biopic Bohemian Rhapsody added another $45M overseas, on top of the $15M it added here, for a worldwide cume of $384M!! So we should probably shut up about this not being a complete enough story, or complaining about the band’s members having too much influence. Clearly, they chose wisely in making a crowd-pleasing film and people are turning out in droves to see it.
4. Instant Family (review)- $14.7M
I was surprised to learn the Mark Wahlberg/Rose Byrne comedy Instant Family is actually pretty good. Not only did our reviewer dig it, but reviews overall have been quite strong, so I’m a little surprised by the middling $14.7M debut. Director Sean Anders pulled from his own personal life to tell the story of a married couple who decide to start a family by adopting three kids, including one rebellious teen, and getting more than they bargained for. My gut tells me this sticks it out and does solid business. This is the right time of year for this kind of all-ages entertainment, after all.
5. Widows (review)- $12.3M
I’m a bit perplexed by this one. Widows is the well-reviewed crime thriller from acclaimed director Steve McQueen, penned by Gone Girl author Gillian Flynn, and starring an incredible cast of Viola Davis, Liam Neeson, Colin Farrell, Michelle Rodriguez, and more. The film opened to just $12M in 2803 theaters, a disappointing number when you look at the level of talent across the board.  So what’s the deal? Part of me thinks audiences were confused about what to expect. Is it an artsy prestige drama or a commercial heist flick with superior casting?  Whatever the case, without an Oscars boom Widows will go down as a disappointment.
6. The Nutcracker and the Four Realms– $4.6M/$43.8M
7. A Star is Born– $4.3M/$185.8M
8. Overlord– $3.8M/$17.7M
I expected more from Overlord, Bad Robot’s buzzy zombie-war thriller. Perhaps they SHOULD have made it a Cloverfield film? After two weeks the $38M picture only has $17M domestic and $32M worldwide, which is on the low end of J.J. Abrams-produced flicks.
9. The Girl in the Spider’s Web– $2.5M/$13.2M
I think we can call it a day on Sony’s adaptations of Stieg Larsson’s Millennium novels. The studio famously hemmed and hawed whether to followup David Fincher’s The Girl with the Dragon Tattoo, and that at least made $100M stateside and $232M worldwide. Not bad for an R-rated thriller nowadays. But the sequel, The Girl in the Spider’s Web, which features an all-new, less starry cast led by Claire Foy, went the PG-13 route and has only managed $13M here and $26M overall. Oof.
10. Nobody’s Fool- $2.2M/$28.8M