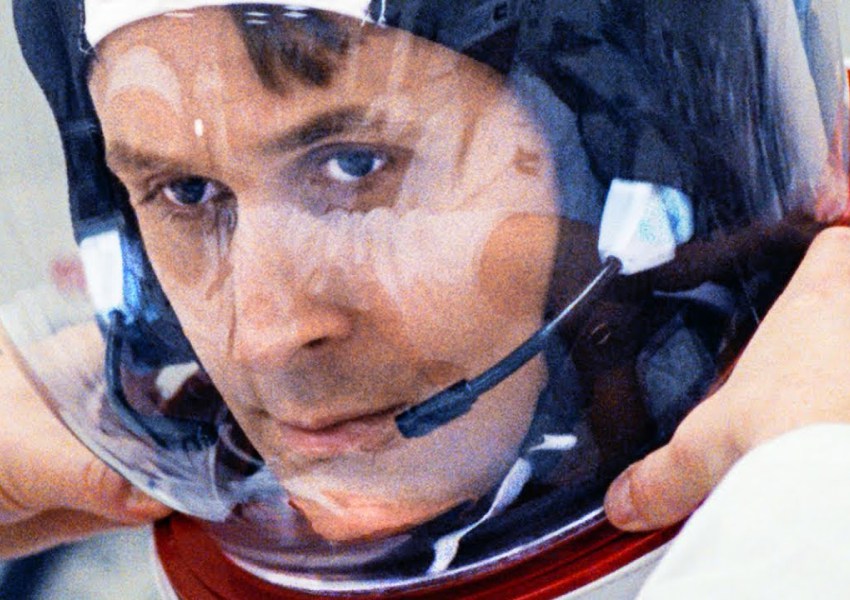 It’s to the credit of 2016’s Best Director winner Damien Chazelle that his tremendous space epic First Man is as different from his previous films as there is distance between the Earth and the Moon. After the bruising Whiplash and swinging La La Land, Chazelle embarks on an austere, technical drama about astronaut Neil Armstrong, (in)famously reserved despite his status as one of the most important figures in our history, and certainly to space travel. While controversy has circled the film for its supposed lack of patriotism, it would be impossible to come away feeling anything less than pride at Armstrong’s achievement.

What’s so interesting about First Man, and the hurdle Chazelle and screenwriter Josh Singer had to overcome, is that Armstrong is such a blank slate. As played by Mr. Understated himself, Ryan Gosling, he is a man of little outward emotion and not much of a conversationalist. That puts most of the burden on Chazelle and DP Linus Sandgren to project some of the film’s grander themes through technical wizardry. Gosling still manages to shine as the tight-lipped, steel-jawed former test pilot, who is spurred on to greater things following the death of his daughter.  Joining NASA at the height of the space race, he witnesses first hand the true human toll of their endeavors. In fact, for much of the movie that seems to be the point driven home most, that such an incredible feat as landing on the moon requires incredible sacrifice.

It can be a little jarring that Armstrong does come off at times like a passenger in his own story, but in a way that also makes sense when you consider the enormity of his mission. Much of the film deals with the technical steps and procedures involved with space travel, and the outside pressures, many of them political, that propelled NASA forward. This was the 1960s, a time of volcanic social change, but Chazelle largely keeps the narrative out of the political fray other than some old Vietnam War footage and the feeling of space as an escape from the nation’s chaos. Meanwhile, Armstrong internalizes any pressure he is feeling, whether at home or on the job. Claire Foy shines as his wife, Jan, who I think is our avatar in expressing frustration at Neil’s isolation. She still doesn’t get much to do beyond the typical “housewife” role too common for these biopics, but that doesn’t take away from Foy’s performance.

Gosling and Foy are surrounded by an excellent supporting cast making the most of their limited screen time. Nearly all of them are playing pivotal NASA figures whose stories could probably support their own movies, which is why it’s a little disappointing to see them zip by so fast. In particular Patrick Fugit impressed as Elliot See, one of Armstrong’s closest friends and a colleague in the Gemini missions. Jason Clarke as Ed White, first man to walk in space; Corey Stoll as Buzz Aldrin paints the astronaut as a self-involved prick; and Kyle Chandler as NASA chief Deke Slayton; they all leave an impression as crucial people in Armstrong’s orbit.

Rich in era-specific detail and shot in beautifully grainy 16mm and 35mm, First Man is like an archival newsreel come to life. You want to watch it and file it away in the Library of Congress almost immediately. Sangren proves incredible adept no matter what the situation calls for, whether it be Armstrong’s simple domestic life or the nauseating whirl of the cockpit. And when Armstrong does eventually crack the surface and reach the moon, you can’t help but bask in the glorious widescreen beauty of it. First Man is a film that demands to be seen in IMAX.  The actual moon landing sequence, the subject of so much chatter from those who haven’t even seen it, is guilty of only one cheesy, melodramatic misstep that thankfully floats away pretty quickly.

So while First Man may not wax poetic, it still soars with the same epic sweep of Ron Howard’s Apollo 13.  In the biggest movie of his career Chazelle proves he’s just as brilliant when given a larger canvas, literally the stars themselves, to paint on.