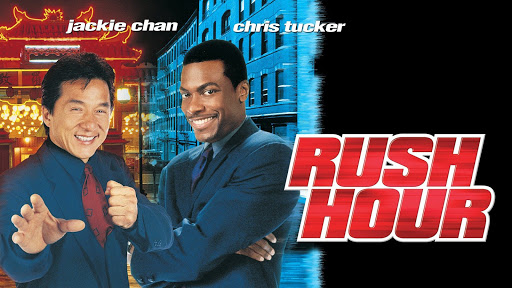 20 years ago this month Chris Tucker, Jackie Chan, and for
better or for worse, Brett Ratner were launched into the world of international
super-stardom following the blockbuster reception of Rush Hour. Before you jump down my throat, I’m fully aware that
Jackie Chan was an international superstar long before 1998, but this is the
film that made him a legit American movie star, in fact it was the first film
where Chan delivered his lines in English himself, rather then having them
dubbed over. It took place in New York but the spoken language was Chinese and
felt like an imported Jackie Chan flick. So what elevated Rush Hour from fun summer film to action classic? Quite a bit more
then you may think.

While it may seem
like, and is, a silly buddy-cop action movie it’s also much more than that.
First and foremost, it was a major Hollywood production without a white guy in
either one of the lead roles, this was the 90s #OscarsSoWhite was a LONG way
away and though it was more progressive then any decade before there was still
a long way to go. You wouldn’t think a film like Rush Hour would be driving edge in diversifying who gets lead
roles, but it was just that. It’s really hard to tell someone you cast a white
guy because that’s all audiences want when a movie lead by an African-American
and Chinese man makes $141M at the box office. It may not have been their
intention but by proxy or by design they proved that audiences just want a fun
film, regardless of what the lead looks like.

Bouncing off that, and possibly because of the films
different take on a tired trope, Rush
Hour revitalized the buddy-cop sub-genre. Coming off its hay day in the 80s
buddy-cop flicks were dying, only producing the ridiculous in an attempt to do
something different. With movies like Stop!
Or My Mom Will Shoot! which teams Sylvester Stallone up with Estelle “Oldest
Golden Girl” Getty and Cop and a ½ in
which Burt Reynolds (RIP) partners with, I kid you not, an 8 year old. The once
loved genre seemed to be all out of tricks. What they hadn’t tried was teaming
up a legit funny funny and upcoming comic actor with a legit “beat
the brakes off your ass” action star. Chris Tuckers lightning delivery gave us
such quotable moments as “DO-YOU-UNDERSTAND-THE-WORDS-THAT-ARE-COMING-OUT-OF-MY-MOUTH?”
and “Don’t you ever touch a black man’s radio” that people still, albeit
rarely, recite today. Then you have Jackie Chan who sent a roundhouse kick full
of “How in the hell did he do that” right into the frontal cortex of everyone
in the theater with his logic defying martial arts and stunt work. Most importantly
though, it was the chemistry of the two that really made the movie work. I
could type up a list of things supporting this statement but you really need to
look no further then this clip of Carter teaching Lee about War:
The last gift given to us by Rush Hour was the post-film blooper reel. It had been done before,
for sure, but only sporadically and they were never something that made a
lasting impression. Just as you are getting ready to leave the theater you’re
treated to 4 minutes of the absolute funniest outtakes any movie has produced
up to that point. This addition to the films credits inspired countless movies to follow suit, it was the Marvel post-credits scene of its day. From Chan’s botched stunts and missed attempts at speaking
English to Tucker trying desperately to deliver the line “Who you think you
got? Chelsea Clinton” It was the perfect button to an awesome film that gave us
a peek behind the scenes to see how much fun they had filming the movie and how
genuinely funny Jackie Chan is. Stay to the end when Jackie Chan gets his just
desserts while watching Chris Tucker fail miserably at trying to deliver one
single line in Chinese.