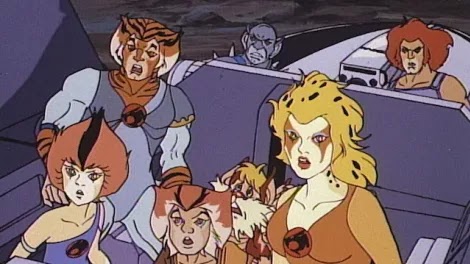 Rumors pop up in the strangest places. Not like Hawkins, Indiana or Derry, Maine, but in totally random sites that seem to have conjured them up out of the Upside Down. One such rumor that has emerged fully-formed out of the Hellmouth has to do with a Thundercats movie, which fans of the classic ‘toon have long been hoping for. So this rumor, which set Ryan Reynolds, Michael Bay, and the Deadpool writers on the project, is particularly egregious. Suffice it to say, the folks at IGN Middle East who reported it had no idea what they were talking about.

Both Ryan Reynolds and Deadpool co-writer Rhett Reese shut down rumors of a Thundercats movie on Twitter. Reese took the short and sweet route, while Reynolds responded more in the fashion we would expect from him…

I don’t understand… Six Undergroud is an insane action film set in amazing locales like Florence, Abu Dhabi and Thundera. This is the most ridiculous rumor yet.

So where did this whole thing come from, anyway? So Bay, Reynolds, Reese, and Paul Wernick actually are making a movie together. Titled Six Underground, it’s an action flick for Netflix that also stars Now You See Me alums Melanie Laurent and Dave Franco, along with Corey Hawkins (Straight Outta Compton). Somehow, the original story made the leap that it’s actually a cover for a live-action Thundercats movie, based on the word of  a reliable source that is working closely with the Abu Dhabi production team for the movie.

How much you want to bet they keep posting stories based on this “Curveball’ of a source?

Anyway, I’m sure there will be a Thundercats movie someday, but the time isn’t now and these aren’t the folks involved. Bay has already driven two nostalgia properties into the dirty (TMNT, Transformers), and it’s doubtful he’ll get a shot at a third.