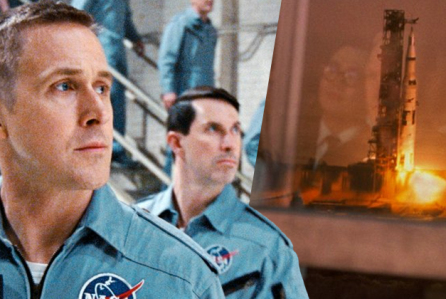 I’ve been on the road all day, only stopping periodically to see what the buzz is all about, and each time the weirdest headline kept grabbing me, “Chazelle’s First Man is un-American! Ryan Gosling Defends Film”.  Mind blown over what the Hell this could possibly be about, I found out that some were claiming his film, which depicts Neil Armstrong’s  historic flight to the moon, doesn’t show the unforgettable moment when he plants the American flag. And of course, this is an outrage. Or at least it’s a Twitter outrage, not a real one.

You’ve probably seen the screaming, angry rhetoric as well, mostly from conservatives like Bill “I’ve never been right about anything” Kristol,and Florida senator Marco Rubio who calls it “total lunacy”,  neither of whom has actually seen the film. So what’s the truth?

The truth is that First Man does have the American flag in it throughout. But does it have that iconic moment when Armstrong actually plants the flag? No, it doesn’t. Is this somehow a “politically correct” way to paint this uniquely American moment? Not at all, but a creative choice by director Damien Chazelle who wanted to focus on the parts of Armstrong’s life that we haven’t seen a thousand times before. Here’s part of his statment…

“I wanted the primary focus in that scene to be on Neil’s solitary moments on the moon — his point of view as he first exited the LEM, his time spent at Little West Crater, the memories that may have crossed his mind during his lunar EVA.”


Seems reasonable to me, so what was it that caused this Twitter shit storm? Probably some comments by Gosing during a press conference, specifically these…

“I think this was widely regarded in the end as a human achievement [and] that’s how we chose to view it. I also think Neil was extremely humble, as were many of these astronauts, and time and time again he deferred the focus from himself to the 400,000 people who made the mission possible.”


“So I don’t think that Neil viewed himself as an American hero. From my interviews with his family and people that knew him, it was quite the opposite. And we wanted the film to reflect Neil.”


Because we’re talking about Twitter outrage, and faux-conservative outrage at that, of course this was blown out of proporation and slanted to mean that Chazelle was trying to strip America of this incredible feat. That’s obviously absurd, even for a movie that will play globally, but you can see how Gosling opened the film up to criticism. I’m sure he was just trying to talk to the audience, and since he was at the Venice Film Festival it was a gaggle of international press.

The take home from this debacle? Maybe it’s best to watch the movie before you shit all over it. Oh, and Neil Armstrong’s sons? They don’t think the film is anti-American in the least. See their statement below.  [Deadline]

We’ve read a number of comments about the film today and specifically about the absence of the flag planting scene, made largely by people who haven’t seen the movie.  As we’ve seen it multiple times, we thought maybe we should weigh in.
This is a film that focuses on what you don’t know about Neil Armstrong.  It’s a film that focuses on things you didn’t see or may not remember about Neil’s journey to the moon.  The filmmakers spent years doing extensive research to get at the man behind the myth, to get at the story behind the story.  It’s a movie that gives you unique insight into the Armstrong family and fallen American Heroes like Elliot See and Ed White.  It’s a very personal movie about our dad’s journey, seen through his eyes.
This story is human and it is universal.  Of course, it celebrates an America achievement.  It also celebrates an achievement “for all mankind,” as it says on the plaque Neil and Buzz left on the moon.  It is a story about an ordinary man who makes profound sacrifices and suffers through intense loss in order to achieve the impossible.
Although Neil didn’t see himself that way, he was an American hero.  He was also an engineer and a pilot, a father, and a friend, a man who suffered privately through great tragedies with incredible grace.  This is why, though there are numerous shots of the American flag on the moon, the filmmakers chose to focus on Neil looking back at the earth, his walk to Little West Crater, his unique, personal experience of completing this journey, a journey that has seen so many incredible highs and devastating lows.
In short, we do not feel this movie is anti-American in the slightest.  Quite the opposite.  But don’t take our word for it.  We’d encourage everyone to go see this remarkable film and see for themselves.