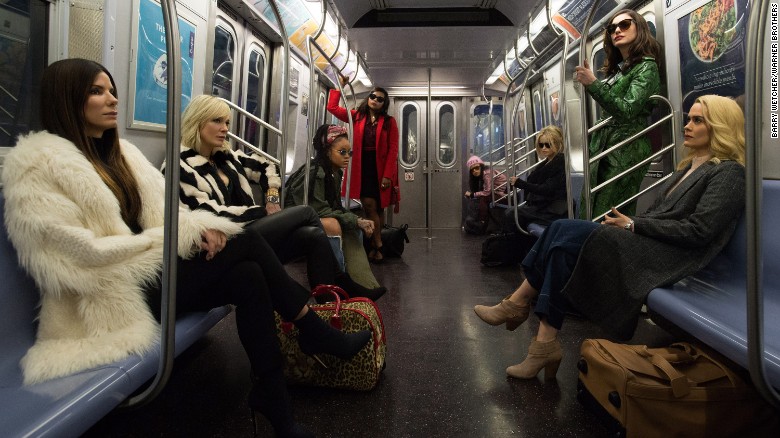 You don’t need a jeweler’s loupe to see the similarities between Steven Soderbergh’s Ocean’s 11 films and Gary Ross’s breezy, female-led Ocean’s 8. The surface pleasures are largely the same, and so are the imperfections. The heist is, by and large, the least interesting thing about these movies. We show up to see beautiful all-star casts mingling in designer outfits, and Ocean’s 8, which must have a costume budget bigger than some entire productions, delivers on everything we hoped for, just from a female perspective.

It was a savvy move extending the popular Ocean’s franchise in this way, but the brightest decision of all was the casting of Sandra Bullock as Debbie Ocean, equally criminal sister to George Clooney’s thieving Danny Ocean. Bullock, whose career has been marked by roles that emphasize the clash between her physical beauty and manly abrasiveness, is a perfect face for a film that looks to appeal to new and old audiences alike.

Everything will feel familiar right from the jump, with the film even opening in a parole hearing just like Ocean’s 11 did. That’s where Debbie, forever the con, fools her way to freedom with some bunk about wanting to live “the simple life.” Within moments of being released, in a swanky low cut dress I might add, she’s off and planning her next big job; stealing a jewel worth $150M from the Met Gala, right off the perfect neck of ditzy actress/socialite Daphne Kluger (Anne Hathaway).

The best part of these movies is, of course, assembling the team, and Debbie first calls out to her former partner Lou (Cate Blanchett), who is reluctant but clearly interested.  It’s here that costume designer Sarah Edwards clearly defines each character’s personality through their individual style. Lou rocks out in a collection of slick Burberry suits (that powder blue joint!!); Rihanna gets grungy as hacker Nine Ball; Awkwafina goes skate-style as pickpocket Constance; the reliably quirky Helena Bonham Carter as disgraced fashion designer Rose Weil; a slightly conservative style for Mindy Kaling as jeweler Amita; and Sarah Paulson decked out in suburban wear as Tammy, a fence and stay-at-home mommy.

These movies are meant to be glamorous, stylish affairs that leave the audience swooning at the latest fashion trends on display and the beautiful celebs wearing them. It’s perfectly alright and expected, but the script co-written by director Gary Ross and Olivia Milch also recognizes the world we live in now. “A Him gets noticed, a Her gets ignored” Debbie replies when asked why no men are allowed on the team, a snappy and timely line that drew applause from the crowd at the screening I attended. There isn’t much in the way of conflict among the team, or in the crime itself, choosing instead to celebrate female camaraderie rather than turn this into a lazy cat fight. Men get short shrift, of course, including a former flame (Richard Armitage) just asking for a comeuppance of some sort, and you wish there was someone who could pose a threat Debbie’s team. While never boring, the film doesn’t give you any reason to think the job will be unsuccessful, either by internal or external forces.

Ross does a pretty good job mimicking Soderbergh’s stylish cinematic cues. Montages, slick editing, screen wipes, nostalgic musical notes…they’re all in here and you’d never know Soderbergh was only listed as a producer. If the film is a hit and he sticks around, one has to wonder if he’ll recruit his Hunger Games star Jennifer Lawrence into the fold. She’d fit in perfectly with this group, especially alongside Bullock and Blanchett. They don’t quite have the same chemistry as Clooney and Pitt, but that would be tough for any duo to achieve. Hathaway is having way too much fun playing the airhead, while Rihanna has what I think is her strongest role in a major film yet.

Ironically, Ocean’s 8 isn’t here to con anybody. It is here simply to entertain, to dazzle us with pithy jokes and an excess of eye candy. On that all-important score, these ladies have proveb they are just as capable of getting the job done as any man.