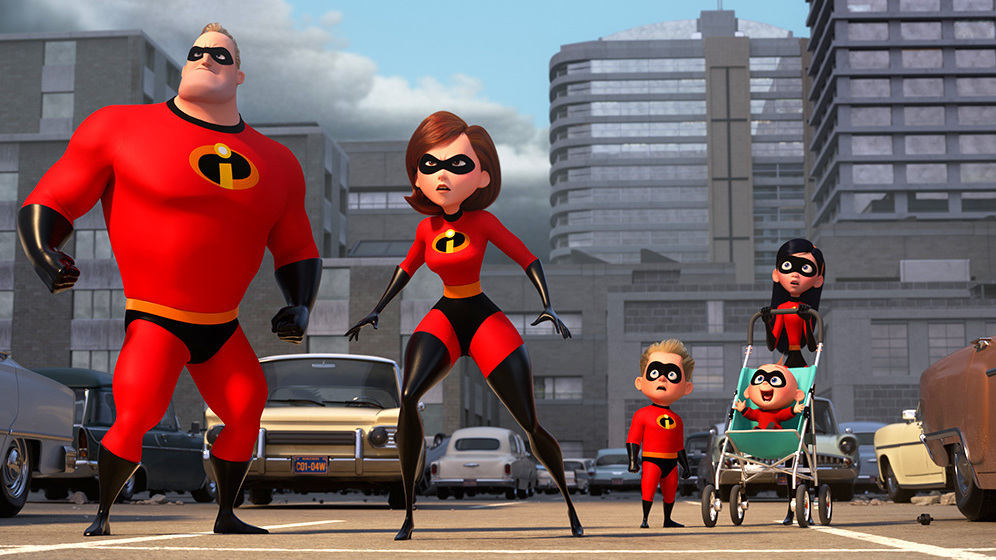 When The Incredibles first came bounding into theaters fourteen years ago (!!!) it was into a totally different world than its sequel. The Marvel dominance wouldn’t begin for at least another four years, and there was no #MeToo or #TimesUp movement to speak of. Pixar, ever able to roll with the punches and make movies that are timely yet timeless, has punched through the glut of comic book movies with a knockout combination of super-powered family dynamics, incredible action, and a heavy dose of girl power.

The Incredibles 2 puts a light-hearted spin on the grim superhuman registration storylines of the X-Men and Avengers movies.  Costumed heroes, or “supers”, are still banned when the film picks up, mere moments after the end of the last one. Prepared to jump into battle against the ridiculous-but-dangerous Underminer are the powered-up Parr family: Super strong Bob aka Mr. Incredible (Craig T. Nelson), stretchable Helen aka Elastigirl (Holly Hunter), and their kids force field user Violet (Sarah Vowell), super fast Dash (Huck Milner), and baby Jack-Jack. Well, Jack-Jack isn’t jumping into anything but trouble, however that doesn’t happen until later.

It’s illegal for the fam to be out there fighting crime, even a supervillain like Underminer, so even though they sorta put a stop to it, they’re still in a heap load of legal turmoil.  As an accountant rings up the damage totals from their so-called win (“We have systems in place!” shouts one insurer), it becomes clear the public just isn’t ready for superheroes to be out there in the world anymore. That’s where siblings Winston (Bob Odenkirk) and Evelyn (Catherine Keener) come in. As telecommunications giants they have the money, technology, and communications know-how to try and change public perception about supers, and they enlist the reluctant Elastigirl to be their face of the operation. Why her? Less property damage if it’s her and not her husband.

So this story finally gives Elastigirl her chance to live her best life. Not that she wasn’t important in the first movie, but this one largely belongs to her as Helen takes on a brainwashing villain known as the Screenslaver. Meanwhile, Bob is stuck at home playing Mr. Mom, dealing with a moody Violet and her boy troubles, Dash’s sugar-induced recklessness, and the sudden emergence of Jack-Jack’s multiple powers.

Returning director Brad Bird strikes a solid balance between Helen’s heroics and Bob’s domesticity, but I wish he had a little more time to focus on the impact their new roles have on the family. With Helen’s newfound independence comes Bob’s perceived threat to his role as the man of the house. He sees, at least at first, as if his masculinity is being threatened by having to stay home and watch the kids; helping with their homework, preparing meals, etc., while Helen goes out and has all the fun he wants to have. It’s a minor complaint only because the movie streaks by so enjoyably, with the Parr family dynamics reminding you of how good a Fantastic Four movie could be if done right. All of these characters play off one another so perfectly well, and when you throw in their ultra-chill pal Frozone (Samuel L. Jackson) into the mix they’re even better.  There’s no need to refresh us on who these characters are, so it jumps right into the action and never lets up. It’s easy to take for granted just how imaginative Brad Bird’s eye for action can be. This is the guy who stepped away to direct a Mission: Impossible movie, and some of Elastigirl’s battles have the same kind of white-knuckle thrills. Some of the best sequences are of her swinging through the city like Pixar’s own version of Spider-Man.

Most of the voice actors return and slide back into their previous roles without much issue; Nelson’s familiar boom as Mr. Incredible is now a bit more whiny. Holly Hunter’s twang has a stronger note of self-confidence, while Sarah Vowell has Violet sounding like every self-absorbed teen who has had enough of the parentals. Meanwhile, Bird remembered to give himself the best gags as the returning fashion designer Edna Mode, and watching her glee at the newly-powered Jack-Jack is a treat. Among the newcomers Keener stands out the most, sounding more like herself as the movie rolls along and Evelyn asserts herself more as a figure in the Parr’s life.

Pixar did themselves a disservice making us wait so long for The Incredibles 2. They had to know expectations were through the roof, but they’ve met and exceeded those expectations. The race for best animated movie of the year has a powerful new frontrunner and I’m not sure anything will be the kryptonite that defeats it.

Giveaway: Enter To Win ‘Nobody’ On Digital!