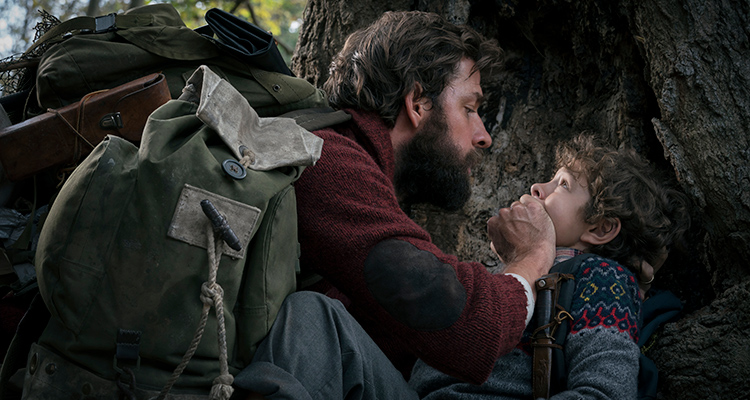 I’ve never been a hug fan of horror, but I’m even less a fan of going to horror movies. Most of the lame PG-13 horrors lack teeth, and are willing to simply invite the audience to chuckle and talk over the action. They’d rather make people laugh than scare them. It’s a way of controlling the crowd, but I much prefer the way John Krasinski does it with his nail-biting, suspenseful A Quiet Place, which had the audience too scared to make a sound.

Krasinski’s third film as a director and by far the best of his career, the story is told in near complete silence and with a bare minimum of dialogue. It makes for a nerve racking experience with every sound jolting you to attention. Set in a not too distant future after some global catastrophe, the story begins in upstate New York, or what remains of it. The surrounding area is now stalked by alien creatures that hunt based on sound, and apparently have wiped out the population before anybody realized what was going on.

Pulling double-duty as director and star, Krasinski is joined for the first time on camera by his wife Emily Blunt, and rising stars Noah Jupe (Wonder) and deaf actress Millicent Simmonds (Wonderstruck) as a family living in an isolated home. They exist in near complete silence, struggling every day not to make a sound that will attract the monsters to their door. That makes foraging for food and supplies a complicated risk, as we see in a tragic opening sequence that sets the bar for the high stakes involved. To make a noise is to die, which is why it’s good for them that they all know sign language.

Remaining quiet becomes more difficult by an increasingly dire set of circumstances. A deadly combination of deafness and adolescent rebellion have made the daughter a risky component, while the son shrinks at the responsibilities being placed upon him by his father. The most worrying scenario is the mother’s pregnancy, and with the due date closing in it’s unclear how they plan to keep a newborn child from screaming every five minutes.

At times it feels like there’s simply too much going on, there are so many dangers placed in the family’s path and they all come at once. But Krasinski, who rewrote a script penned by Scott Beck and Bryan Woods, keeps the action split up into different focal point so they don’t overwhelm the viewer. He’s also grown into one Hell of a filmmaker, or perhaps he’s just found his footing with this particular genre. He keeps jump scares to a minimum, creating maximum effectiveness. He deploys sound like a master, freaking us out not with loud bangs but with deathly quiet in the face of terror. A brilliant stretch finds Blunt’s character suffering a grievous injury, and we watch as she strains to keep her pain inside so as not to invite a worse fate. As awful as the tiniest sound can be we’re also invited to recognize how beautiful certain sounds can be: the crashing of a waterfall, a child’s laugh, etc. When characters are actually allowed to speak it’s like all of the tension is, for a brief moment, let loose into the atmosphere.

Expressive performances by all four leads anchor the lean screenplay, necessary because sign language isn’t always the best way to communicate interpersonal relationships. The guilt and resentment tearing the family apart is as hazardous as an errant footstep. You won’t get all of your questions answered, especially if you need a greater sense of the outside world, but that would have unnecessarily increased the brisk 90-minute runtime. Besides, none of that stuff would matter as much as the story of this one family doing whatever they need to survive. A Quiet Place packs a lot of scares and technical precision, making for one of the best monster movies in recent years.