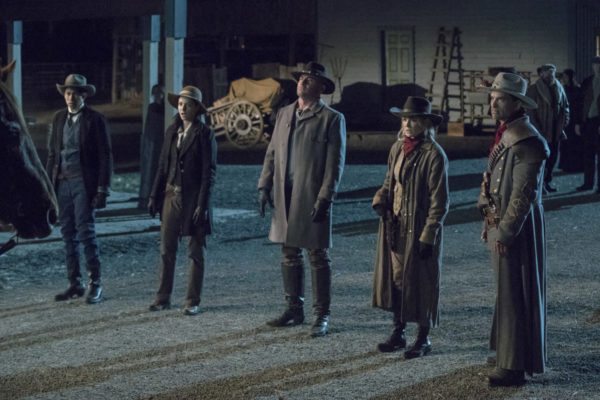 Last week Legends of Tomorrow ended on the ultimate cliffhanger.  The Legends had teamed up with none other than Damien Darhk to unleash the time demon Mallus from his time -based prison in the hopes of defeating the monster.  Darhk tried to betray them at the last minute in order to keep his daughter Nora alive, but the monster was able to break free and use her as a vessel, killing her.  Mallus, who has been possessing people all season long, finally showed his true form as a cross between a gargoyle and The Devil.

With Mallus free, all hell is going to break loose across space-time.  Armed with each of their totems, the Legends try and take the demon head on, but he’s proving to be too powerful for them to even make a dent.  Out of nowhere, the team’s former captain-turned-Time Bureau Agent, Rip Hunter arrives to come and pull their fat out of the fire.  Promising to “distract” Mallus for the team to escape, Rip takes the time drive from the Wave Rider and causes it to overload.  Unbeknownst to the team, this means it’s a one-way trip for Captain Hunter.  While it felt a little forced, Rip takes a trip down memory lane, remembering him forming the Legends to help safeguard time against Vandal Savage (feels like a lifetime ago), as well as his wife and child’s death.  Rip’s ready to move on and be reunited with them.  He warns Sarah that although he is sacrificing himself, all it will do is weaken Mallus.  They will have to get their act together to defeat him. 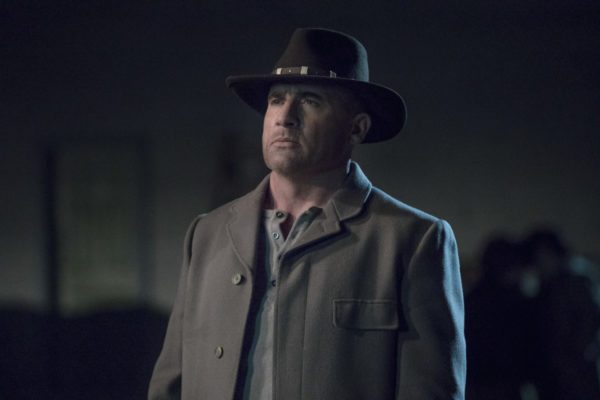 The Legends take the remaining time drive from the shuttle to power the Wave Rider and depart from Zambisi.  Going to Salvation South Dakota in the Old West, they are in a “time pocket” away from Mallus’ prying eyes.  There, they regroup for a few drinks and even run into fan-favorite Jonah Hex.  Damien expects Sarah to fulfill her promise to kill him, but she tells him that his punishment is to live out the rest of his days knowing he’s responsible for his daughter’s death.  However, Ray has other plans.  After promising to not do something “stupid,” he does something stupid.  Breaking Damien Dahrk out of his cell on the Wave Rider (and cold cocking Nate in the process), the two go back to Zambesi just before Norah turns into Mallus.  The plan is to knock her unconscious to prevent Mallus from coming.  Darhk uses the gun with nanites to kill his daughter.  However, Norah is just a vessel, and Mallus can always find another.  Mallus’ spirit then goes into Damien Darhk who sacrifices himself so that his daughter may live.  Rip’s gone, Damien’s gone: Legends is cleaning house in this finale!

While the team is drinking and trying to figure out what the next thing to do, emissaries of Mallus show up in the form of some of their past foes: Blackbeard, Julius Caesar, and the Viking woman.  They make an offer for the Legends.  They either turn in their totems, or everyone in the Salvation will be killed.  The Legends are given until the next day to decide.  Amaya uses this time to meditate and communicate with her ancestors to try and figure out how to defeat Mallus.  Nate walks in and decides to join her on her vision quest, he just takes way too much of the hallucinogen.  As the two go into Zambisi history, they come to the conclusion that the Legends can defeat Mallus if they work together.  After Nate sobers up, they tell the Legends what they need to do.  The Legends try to work as a team and use the totems to create a being that will stop Mallus.  Unfortunately, they create a grotesque creature that Mick puts down. 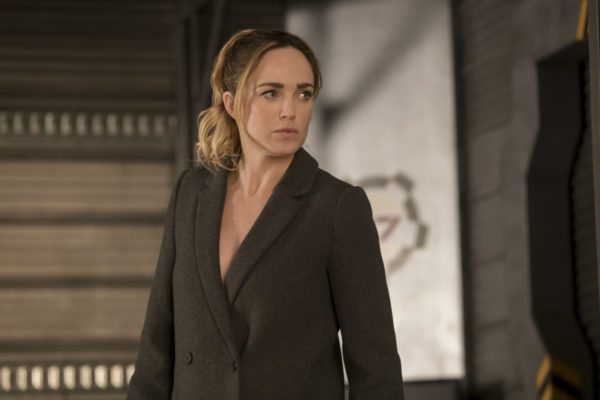 Sarah is dismayed with their failure.  Just in the nick of time, reinforcement comes in.  Ava shows up and along with her is Amaya’s granddaughter Kuasa (now a good guy since Amaya saves Zambisi), Helen of Troy (back from Themyscira), and Jax (now a father after 5 years time).  Now, the Legends have their own army.  This gives the Legends a chance when facing off against Mallus’ forces.  Although the Legends are able to defeat them, they all reanimate and continue the fight.  The B team is able to still try and hold them off, but then Mallus comes ready to lay waste to the whole town.  The Legends know it’s now or never to use their totems the right way.  As they all focus on creating a being that will defeat Mallus (thanks to them sharing their thoughts), Nate thinks of the only wholesome and good thing he can think of. The stuffed animal that the Vikings mistook at the God of War get brought to life, Stay Puff Marshmallow Man style!  A giant version of the stuffed animal then takes Mallus head on Godzilla style.  It’s something that can only happen on Legends of Tomorrow as Mallus the demon and Stay Puff Beebo engage in fisticuffs.  Beebo manages to body slam the time demon, finally saving the day.

As the team prepares to leave Salvation, they wipe all the resident’s memories.  Jonah Hex and Zari share a moment as the two are attracted to each other.  The Legends decide to give all the totems to Kuasa for safekeeping.  Norah is to be retained in the Time Bureau’s custody, but Ray gives her Damien’s time stone so that she can escape.  Amaya makes the decision that he time with the Legends is done and she has to go back to 1942 Zambisi.  Nate takes her back to her home where the two of them share a last kiss as they are to leave each other forever.  While she was supposed to have her memory wiped to avoid the heartache, she tells Nate not to do so in order for her to remember her time as one of the Legends.

The Legends finally get to go on their vacation in Aruba (which they tried to do in the season premiere).  Just as they are enjoying sunbathing and cocktails, John Constantine arrives.  He tells them that Mallus was not the only thing to escape, showing them the head of a dragon.  Looks like next season we’ll be seeing some of the supernatural side of the Arrowverse!