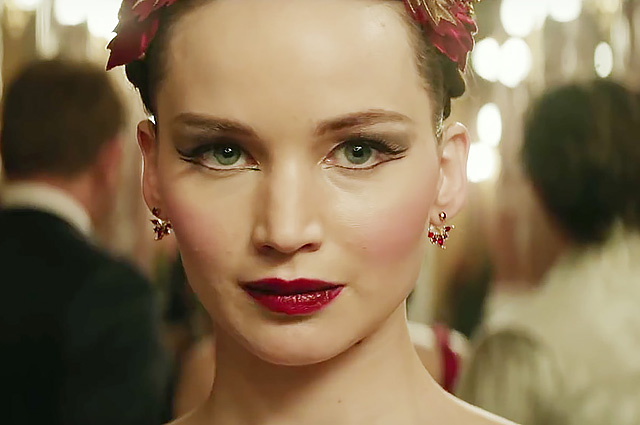 Don’t be fooled, while the trailers for Red Sparrow may suggest Jennifer Lawrence in her first true action vehicle, the film is closer to Bridge of Spies than Atomic Blonde. Sexual power and international intrigue are the heart of this spy thriller by director Francis Lawrence, reuniting with the other Lawrence after a handful of Hunger Games movies. He doesn’t immediately strike anybody as the type to pull a John Le Carre, and his inexperience with the genre is the film’s greatest weakness, but his star makes for a compelling Russian femme fatale even as the story gets muddier than a bowl of borscht.

Lawrence has made a career of playing strong-minded women in empowering roles, from Winter’s Bone to perhaps her defining one as the defiant Katniss Everdeen in The Hunger Games. In Red Sparrow she plays Russian ballet dancer-turned-spy Dominika Egorova, another woman seeking to reclaim her life and identity from a bunch of powerful, corrupt men. All her life the state has pretty much owned her; they allow her to dance, they own the house she lives in with her mother (Joely Richardson), and take care of her mother’s mounting medical bills. So when a crippling accident ends Dominika’s career, she’s desperate to find another way to remain valuable to her country. Matthias Schoenaerts, looking slicker and more polished than his usual ruggedness, plays her uncle Vanya, a high-ranking Intelligence official who has a plan to help Dominika out. Recognizing a little too closely just how alluring his niece can be, Vanya recruits her for an assignment that allows Dominika to use her sex appeal. When the mission goes south, she’s forced to become a Sparrow, and sent off to what is literally referred to as “whore school”, run by Matron (Charlotte Rampling), where Dominika learns how to use sex as a deadly weapon to force information from Russia’s enemies.

Of course, Dominika isn’t as malleable as the others in her class. She’s killer when it comes to using a person’s need for human connection against them, but she also has her own agenda that runs counter to what her superiors demand.

“Don’t give them everything, not every piece of you,” warns her mother, who knows all too well how becoming a Sparrow can strip away one’s humanity.

Meanwhile, Matron has other words of advice…

“You must inure yourself to what you find repellent,” she commands, after yet another demand for her charges to strip and do something lewd at a moment’s notice. Let’s just say the curriculum doesn’t include Algebra or Classic Literature. Date Rape Survival 101, that might be a thing, though.

Red Sparrow is most engrossing when focused purely on Dominika as she makes one compromise after another to achieve her goals. As such, the best parts of the movie involve her training, which finds her weighing which parts of herself to give up, how much of her soul she’s willing to part with. The screenplay, adapted by Justin Haythe from Jason Matthews’ novel, could have dug deeper into what makes her tick. There’s the suggestion that Dominika is out for more than self-interest and vengeance, that perhaps a part of her likes the power she has over men. But it’s, sadly, never followed up on in any recognizable way. Lawrence gives a performance that is sexy and as complex as she can make it, but we leave thinking there was more about Dominika that could have been explored.

Less compelling is just about everything that has to do with U.S. spy Nathaniel Nash (Joel Edgerton), a CIA operative who has blown his cover to protect a top-level source within the Kremlin who has been feeding them intel. He and Dominika cross paths when she’s assigned to ferret out the mole by shadowing Nash, a man she comes to trust. But can he trust her? And where do her loyalties truly lie? With the country she loves that has used her all of her life? Or with the Americans who don’t know whether the Sparrow is playing them? Deception is what she knows best, after all.

There’s the expected tension between Dominika and Nathaniel, but the biggest problem is the lack of palpable chemistry between Lawrence and Edgerton. Not much can be done with that, but it doesn’t help a plot that is twisty yet predictable at just about every turn. The film unfolds in every way you expect it to, and Francis Lawrence isn’t skilled enough with the genre to craft a properly murky atmosphere that could cover for it. In more experienced hands the pace would be described as deliberate and aloof, but under Lawrence’s direction it’s just slow and occasionally dull during its bulky 139-minute runtime.

Red Sparrow is at least an attempt to offer the kind of mature espionage film audiences are frequently denied, and overall it’s a solid effort for fans of the spy genre. Others expecting more than just a by-the-numbers effort  may find that this Sparrow never soars as high as it should.