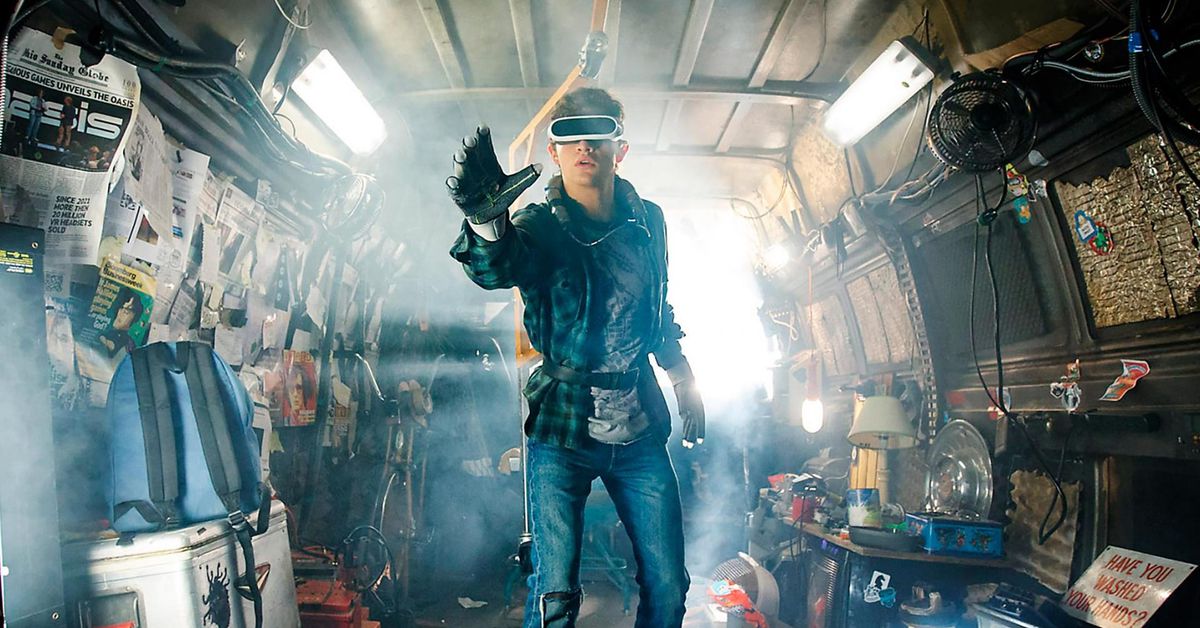 In one of the wildly nostalgic, riveting sequences in Steven Spielberg’s Ready Player One, a T-Rex right out of Jurassic Park goes stomping through a Twisted Metal-esque racecourse. In another, the Delorean from Back to the Future comes skidding onto the screen, just as you remember it. Later, the beloved metal hero from The Iron Giant stomps his way onto a massive digital battlefield. The jaw-dropping homages to the pop culture moments that defined many of our childhoods are so vast they can be easy to miss, but when you spot that one thing that you cherished (or still cherish to some of us grown-up nerds) it’s like all of the good memories come flooding back. Ready Player One is a movie designed to be embraced by the geekiest among us, and on that level it earns a high score.

But what if you don’t care about seeing a Battletoad or Gundam appearance as much as some of us do? Ready Player One, for all its digital gloss and too-cool pop culture references, isn’t the most fully-formed rebellion story ever. And those expecting a note perfect adaptation of Ernest Cline’s cherished 2011 novel may want to steel themselves for a completely different beast. Set in a dystopian future version of Cleveland, OH, it and the rest of the world’s population escape from a hopeless reality by venturing into a virtual reality world known as the OASIS. Think of it as the ultimate online multiplayer game, where users can literally be anyone, go anywhere, and do anything they please. For anime fans it’s like the movie Summer Wars brought to vivid life. Designed by uber-dork James Halliday (Mark Rylance), the OASIS is littered the nostalgic references he loved most. When Halliday dies, he leaves behind a massive Easter Egg hunt, a virtually unbeatable quest that will award the winner full control of the OASIS and his company, basically making them the richest and most powerful person in the world. To win, you basically need to know Halliday inside and out, to a disturbing degree. Like that friend of yours who can recite every single line from The Breakfast Club backwards and forwards.

This sparks an all-out war to find the three keys left behind by Halliday, and one of those in search of it is our hero, Wade Watts (Tye Sheridan). He lives in the towering ghetto known as “The Stacks”, and we know immediately that he’s a kid who knows his ’80s rock bands because the film opens to the tune of Van Halen’s “Jump”. Wade practically lives in the OASIS, slipping into his tiny corner of the neighborhood dump to suit up and dive in, becoming his avatar Parzival. He wants to win Halliday’s prize, he and the other Gunters (Easter Egg hunters) need to win it otherwise the villainous Sorrento (Ben Mendelsohn, always villainous) and the corporate entity he runs will win and destroy everything that’s pure about the OASIS. Along with fellow Gunters Artemis (Olivia Cooke) and Aech (Lena Waithe), they dig obsessively through Halliday’s life, play his favorite video games, and more to figure out how to find the treasured keys.

You’ll notice changes from the book right away. An eyeball-searing race kicks off the hunt for the first of Halliday’s keys, a far cry from what Cline, who helped co-write the script with Zak Penn, originally envisioned. It’s the kind of swap that makes sense from a visual standpoint; much of Cline’s novel revolves around the Gunters playing through a bunch of pre 8-bit video games and nobody wants to see that. This gives Spielberg a chance to overload our senses with the visual wizardry we’ve come to expect from him. Everything about the OASIS is designed to capture your eye, and it does without detracting from the story Spielberg is trying to tell.  Other changes are more questionable, though, and they revolve around the characters. To put it bluntly, Wade and Artemis aren’t supposed to look like prettied-up Hollywood stars like Sheridan and Cooke. That’s okay, but we also see character motivations shifted to suit a story that is less about the quest and more about the fight. This is especially true of supporting figures like Aech and I-R0k (TJ Miller), with the latter becoming more of an outright bad guy with a much larger part to play.

Another change, and this one is pretty major, has to do with Halliday. In the book, the plethora of cultural references were because he was the ultimate ’80s fanboy. He had a love of the rock band Journey, so many of the clues had to do with them. The film version, understandably, has to expand to make  these callbacks about ALL of the characters, not just Halliday, so the references don’t fit in any specific era and don’t always make sense. The Iron Giant, cool as it is to see, is one of those. They sap just a little bit of the story’s personality away.

Another spell-binding sequence is always right around the corner, from an amazing stretch inside Stanley Kubrick’s The Shining to the hilariously random appearance by Chucky, Ready Player One keeps you plugged in for the long haul. Spielberg stays constantly on the move, charging ahead from one awesome setpiece to the next. While this is great for keeping up the momentum towards an epic finale where thousands of your favorite video game and movie characters fight for control over the OASIS (when killed they explode into coins), the stakes are never made as clear as they need to be. We don’t spend enough time in the dull, grey outside world to get a sense of how bad things really are. To be fair, the brief stretches we do spend in reality only make us want to go back into the OASIS, so I guess we are just as addicted to it as the Gunters are.

Nostalgia is a precious thing, and nobody nurtures it better on the big screen than Spielberg does. From the jukebox soundtrack to the John Hughes-esque love story, Spielberg manages to inject just enough heart into all of that spectacle. Ready Player One probably isn’t going to sit alongside E.T. as one of Spielberg’s all-time greats, but what if E.T. could cross paths with Donkey Kong? Now that would be something.