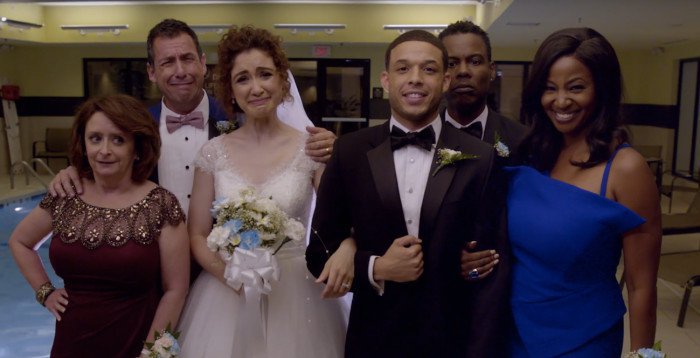 The last time we saw Adam Sandler on Netflix it was for Noah Baumbach’s The Meyerowitz Stories, showing the dramatic potential he’s so often flashed but never really capitalized on. It’s probably not the kind of thing his fans really want to see him in, but fortunately for them they won’t have to wait much longer for his next sophomoric joint. The Week Of reunites Sandler with his SNL and Grown Ups pal Chris Rock for a wedding comedy that Netflix hopes you’ll save the date for.

Looking like a juvenile combination of Meet the Parents and Father of the Bride, the film centers on two dads and the hijinks that ensue in the days leading up to their kids getting married. This looks pretty harmless; not especially funny but harmless. Rachel Dratch, Steve Buscemi, Allison Strong, Rob Morgan (Dude, I love you for basically appearing in anything that will pay.), and Noah Robbins co-star.  Here’s the synopsis:

The Week Of  tells the story of a devoted, middle class father (Adam Sandler) determined to pay for his daughter’s wedding despite the prodding of the wealthier father of the groom (Chris Rock).  A series of calamities forces the dads (and their families) to come together and endure the longest week of their lives.

Netflix will debut The Week Of on April 27th.