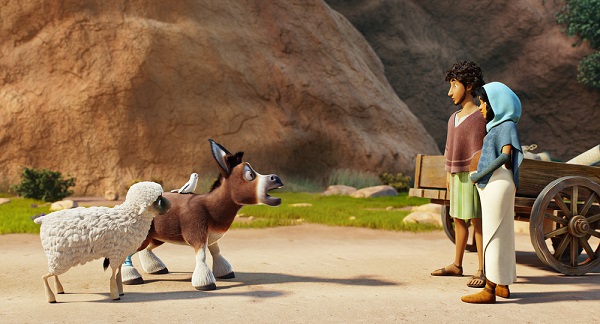 As we roll on towards the Holiday season, everyone gets their annual refresher about the birth of baby Jesus, for who we Christians (and those who just want presents) celebrate the birth of our Lord and Savior.  Most people know this story by heart as it’s ingrained in our faith and our culture.  However, most of us know the story from the biblical or academic perspective.  For some in today’s need-to-be-flashy-and-entertaining culture, the OG story may seem somewhat stale.  How do you go and tell the story of Jesus’ birth in a way that is entertaining and somewhat informative?  Why you can always have some talking animals to liven it up.

Sony Pictures Animation tells the Nativity Story through the eyes of the animals that were there in The Star.  While Mary and Joseph to play a role in this tale, they operate as supporting members of this very large (and very famous) ensemble of all sorts of animals as they all try and follow “The Star” and make it to Bethlehem for the birth of Jesus Christ.  Timothy Reckart, fresh off his Academy Award for Head over Heels puts together an extensive cast including:  Steven Yeun, Gina Rodriguez, Zachary Levi, Keegan-Michael Key, Kelly Clarkson, Patricia Heaton, Kristin Chenoweth, Tracy Morgan, Tyler Perry, Oprah Winfrey, Kris Kristofferson, Christopher Plummer, Ving Rhames, Gabriel Iglesias, Delilah and Mariah Carey for this animated film. 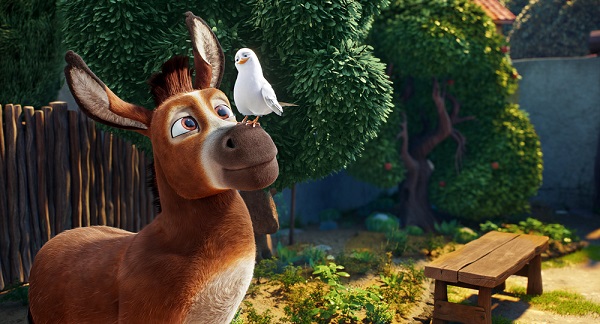 While the trailers have made you think that we were going to focus on three camels (Tracy Morgan, Tyler Perry, and Oprah Winfrey), we spend the most of our time with Bo the donkey (Steven Yeun) and Dave the dove (Keegan-Michael Key), who want something more out of their lives than as servant animals, they want to march in the roman caravan.  When Mary (Gina Rodriguez) is visited by an angel telling her that she will birth the baby Jesus in 9 months, a star shoots across the sky, kickstarting the adventure for many animals including Bo, Dave, the camels, and Ruth the sheep (Aidy Bryant).  After escaping his menial life as a wheat miller, Bo injures his leg and ends in the care of Mary, just as she tells Joseph that she is pregnant with the son of God.  Meanwhile,  King Herod (Christopher Plummer) is nervous of the new “King of Kings” that will be born and dispatches his lieutenant and his two attack dogs (Ving Rhames and Gabriel Iglesias) to find Mary and Joseph.

The animation for The Star is done very well.  As expected from a Sony Animation film, the CGI works well as it would in any of their other well-made films like the Hotel Transylvania or the Smurfs and their sequels.  The film itself is a little more to be desired.  While the The Star sticks to its Christian roots, to the point you will probably want to pull out your bible or go to Sunday school to make sure you remember everything and everyone’s names the way it was in the film (they put a large disclaimer at the end of the film that significant liberties were taken).  The film isn’t 100% sure if it wants to be a Christian history lesson, or just a fun kids animation complete with poop and fart jokes.  Some of the jokes work, others fall flat.  One running joke that works until they run it into the ground is the fact that the humans can’t understand the animals.  While it’s refreshing that in an animated movie, there is a separation between humans and animals talking (see: any Disney movie from the last 50 years), the joke wears thin after the third time its tried. 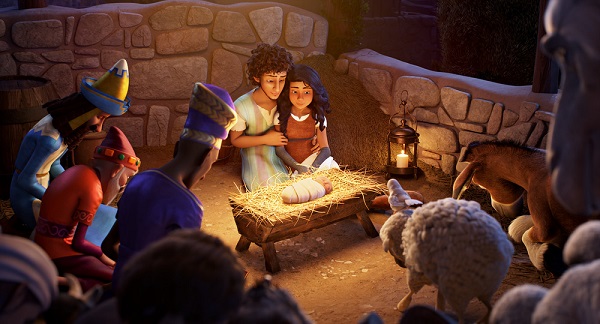 The film does have great moments when it comes to friendship, destiny, and doing the right thing.  The character who goes on the hero’s journey is Bo as he’s the first animal we see and therefore the audience avatar.  Bo wants to do one thing with his life and throughout the film, he gets to really understand who he is and what he wants to do, giving his significant character development compared to the rest of the uniquely large cast.  His buddy Dave seems like he’s just along for the ride, but their friendship gives him (excuse the pun) wings. 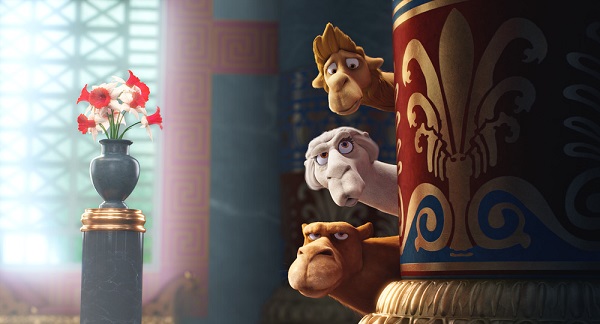 Because this film is aggressively Christian (and doesn’t care to hide it at all), the soundtrack is full of all sorts of gospel singers.  Unlike most animated films, the main characters don’t do the singing.  When the film breaks into musical interludes, we get to hear Kirk Franklin, Yolanda Adams, Pentatonix, and Casting Crowns to name a few.  The main song “The Star” is sung by Mariah Carey, cause, well, it’s Christmas time, and you know Mariah’s gonna have a Christmas song.

The Star is made primarily for its core audience, and will have no problem making its budget back as many folks can easily go to the theaters after church.  In fact, don’t be surprised if many churches bus their parishioners after service to go and see this movie.  Secular people can enjoy the film too.  It’s very Christian, but it doesn’t beat you over the head with its messages, and the themes are relatable no matter what religion you are.