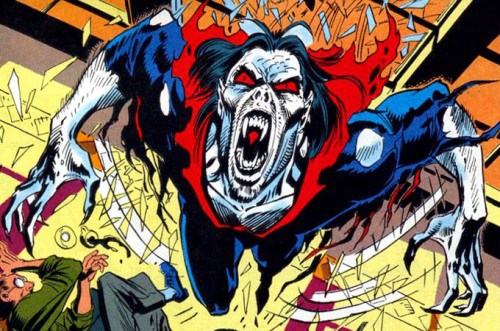 Kinda considered a joke at first, Sony’s non-Spidey Spiderverse is actually looking pretty good. Venom will be the first film out of the gate and it has Tom Hardy, Michelle Williams, Jenny Slate, and Riz Ahmed on board, followed by a Silver Sable/Black Cat crossover flick with Gina Prince-Bythewood directing. And now another prominent Spidey character is getting his own movie; Morbius, the Living Vampire.

Penned and already submitted to Sony by Burk Sharples and Matt Sazama, co-writers of Power Rangers and the more apt Dracula Untold, the film will center on Morbius, a man with vampire abilities gained through a scientific experiment. He debuted in 1971 as a villain in the pages of The Amazing Spider-Man, but would eventually grow in popularity and become a tragic antihero.

With the script already completed the search is on now for a director. Morbius could, and probably should, be conceived as a straight-up horror movie since that is how the character has best been portrayed. His ties to Venom are tenuous, though, so we may see this be a completely standalone effort, or a franchise that’s a little off the beaten path. [THR]