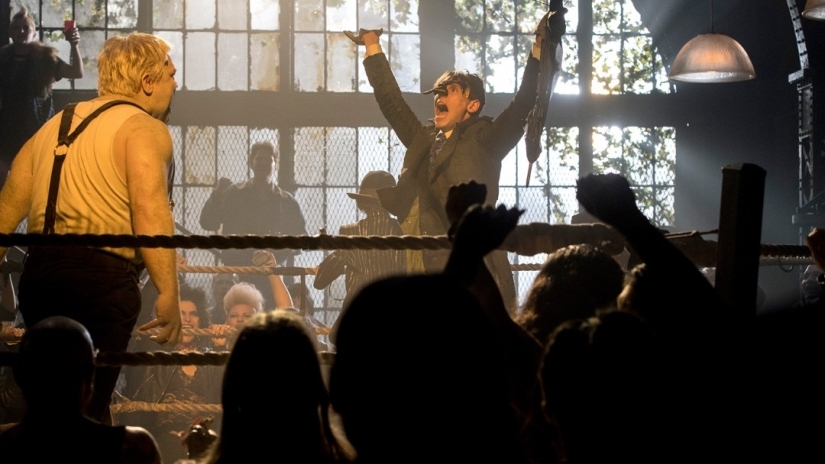 This week’s episode of Gotham is filled with promotions, life lessons,
and relationships. Lets dive in, shall we?
Nygma story arc – “Stupid Lame Bird Brain”:
We begin back in the world of underground
fighting where we see Nygma dressed as Penguin. Nygma is taking pleasure in
mocking Penguin in an elaborate performance that the crowd seems to be eating
up. Lee warns Nygma that he is playing a dangerous game, but Nygma brushes off
the warning. In the ring, Grundy is facing a challenger who is off to a fast
start, landing some early blows. With each hit to his head, Grundy is seeing
flashes of his past which leave him quite confused. He shakes that off and
quickly disposes of his opponent… leading to the title of the episode becoming
incredibly clear from the get-go this week.
My thoughts: This
week we get introduced to something I like that call ‘Grundyvision.’ We are
taken into the mind of Grundy and see his flashbacks and see through his eyes. Nygma
is still as stupid as ever, but he is getting much better at figuring out different
ways to use Grundy to his advantage.
Jim story arc “Nothing In Gotham Is Free”:
The mayor has promoted Jim to Captain of the GCPD. Even with
everything going on between him and Harvey, his loyalty shines through
and Jim denies the job. The mayor tells him that Harvey is done, and if Jim
doesn’t take the job, someone else will. The mayor convinces Jim to hold on to
the contract, and to sign it if he has a change of heart. Jim goes back to the
precinct where Harvey is shouldering all the blame for Pyg’s trap. Jim tries to
remind him that everything is Pyg’s fault, not Harvey’s.
Harvey asks Jim to go to the bullet-hole club to support him
giving the bullets to the officers shot during Pyg’s trap, a tradition among
the officers of the GCPD. Jim takes a midday break to let Sophia know about the
promotion the mayor offers him. Quickly into their conversation, Jim realizes
that Sophia is behind Jim being promoted to Captain. Jim goes to the bar to
support Harvey during the bullet-hole club, but Harvey is a no show, leaving
the box of bullets for Jim to hand out. Jim performs this difficult task, the
task that should be performed by the GCPD Captain.
Jim finds Harvey drinking at his desk and wants to know why
he ditched the ceremony. Jim tells Harvey that his job is to take
responsibility for what happens to his officers and Harvey questions how Jim can
tell him what his job is. Jim has had enough of Harvey’s lack of leadership and
professionalism and has reached his limit. In a purely savage move, he signs
the contract the mayor gave him in front of Harvey and immediately removes him
of his duties of Captain of the GCPD. At the end of the episode, Jim goes to
visit Sophia and tells her that he is not her puppet. He tells her to leave
Gotham, a request that she immediately declines.

My thoughts: What
does Sophia want!?!? I have no idea what her motivations are and what game she
is playing. It seems like she is going back and forth making Penguin and then Jim
stronger. Maybe if she pits them against each other, they both might fail and
when the dust settles – she’ll be left standing? There is a chance that
Sophia’s plan might be backfiring as both Jim and Penguin have grown to resent
her during this episode. We all knew that the tension in Harvey and Jim’s
relationship was heading towards its breaking point… Jim taking Harvey’s job is
one major step in that direction. Jim clearly feels terrible for betraying
Harvey, but it will be curious to see how Harvey responds.
Barbara, Selina, and Tabitha story arc – “Looking For
Trouble“:

Penguin finds out about Nygma’s one man show and is quite
displeased. He sends Tabitha, Selina, and Barbara to the Narrows to see the
show and bring back Nygma – with or without his consent. Penguin sends Firefly
after the three of them to make sure that they get the job done. If they don’t,
he wants her to burn them all to cinders. 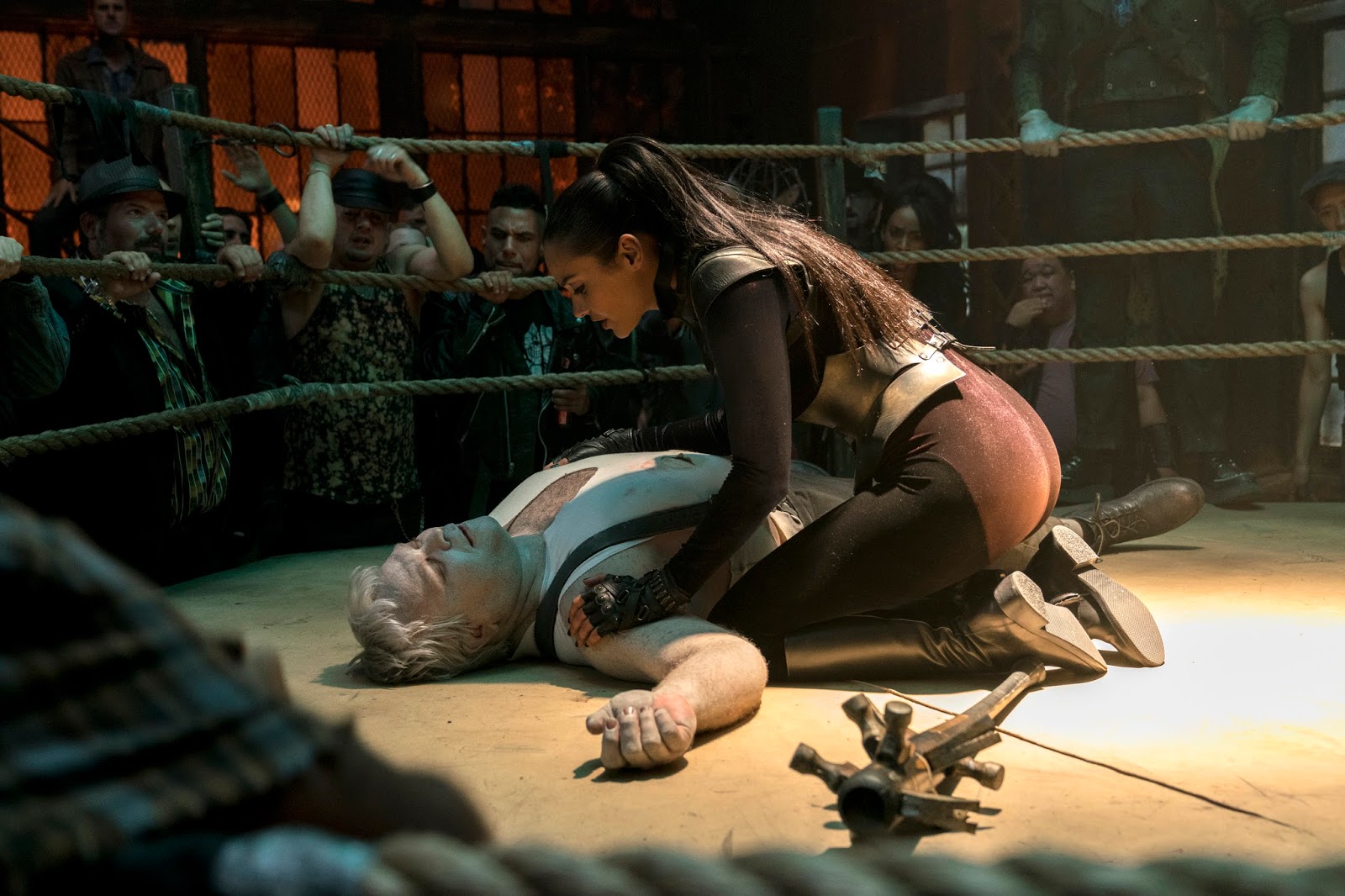 Barbara, Selina, and Tabitha get to the ring to see Nygma’s
performance and notice Lee in the audience watching. Immediately after, Grundy
enters the ring leaving Tabitha dumbfounded at how Butch can still be alive. She
manages to track him down backstage and sees that he is not the Butch of old. As
Tabitha is doing this, Barbara decides to check in on Lee. With her two
partners gone off on side tangents, Selina goes to take care of the reason
they are there in the first place – to kidnap Nygma. Eventually Barbara has had
enough of her back and forth with Lee and goes to help Selina.
As Selina and Barbara are leaving with Nygma, Grundy tries
to stop them. Selina invokes the ‘code of the narrows’ – their best fighter
would take on Grundy, the winner gets Nygma. Tabitha believes that Butch is
still in Grundy’s mind somewhere and that he wouldn’t hurt her, everyone else
is not so sure. The fight starts off with Grundy attacking Tabitha, but after a
few blows to the head – Butch’s memories are clear and Grundy remembers
Tabitha. Unfortunately she doesn’t realize it in time and knocks out Grundy. Barbara,
Selina, and Tabitha try and take Nygma and leave, but are met with a lot of
resistance from the people of the narrows. Firefly shows up and decides that
the three of them didn’t meet their deadline, so they must be burned to a
crisp. 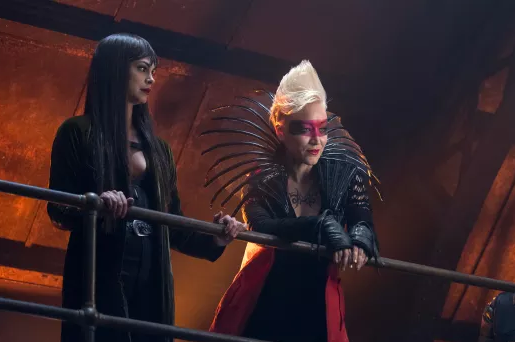 Lee saves the day by shooting Firefly’s gas tank which puts
the fire out before it even started. Cherry tries to get the crowd to turn on
Barbara and co. but Barbara quickly shoots Cherry in the head and proclaims
that they no longer work for Penguin. The people of the narrows look to Lee as
their new leader. Lee denies the responsibility at first saying she is not a
leader, but Nygma convinces her otherwise.

My thoughts: In a
very interesting mirroring of the conversation Jim has with the Mayor to start
the episode, Nygma and Lee have the same one to end it. Jim and Lee have both
ascended in their respective workplaces, which seems ripe for their paths to
intersect soon. Barbara, Selina, and Tabitha going rogue is another hit to
Penguin’s power. He is not the forgiving type, so I imagine he will find a way
to try and deal with them in the future.
Penguin story arc – “Minions Are So Much Better Than Friends“:

While Penguin has sent out Tabitha, Selina, and Barbara to
do his bidding – he spends his time at the orphanage. He notices one boy
getting picked on and watches as this child prepares to set the bullies’
backpacks on fire. Penguin stops him from doing so and tries to instill some
life lessons in him. Penguin trains the boy on the most strategic (and less
violent) ways to take down his bullies. By the end of the episode, the training
does get a little more violent as Penguin is showing the boy the proper way to
stab someone. Penguin receives the bad news (and it comes in threes) that Nygma
was not kidnapped, firefly was disabled, and Jim was promoted to Captain. Sophia
tries to comfort him by saying that business isn’t everything. This leads to
Penguin once again doubting Sophia’s loyalties as he seems to blame her for
Jim’s ascension in the GCPD ranks. 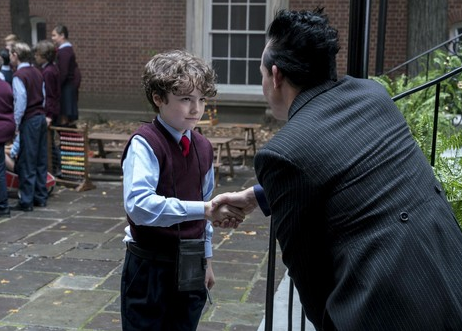 My thoughts: Things
are starting to slip away for Penguin. Not only does he no longer have an agreement
with the GCPD, but now Jim is in charge. His is also starting to lose his hold
over the criminals of Gotham. Zsasz will be back soon and as long as he has him
on his payroll, he will always keep some power. He clearly is back to not
trusting Sophia, and I’m sure he’ll devise some scheme to test her loyalties
once again.
Next week on Gotham:

Bruce is back, Pyg is back – and all is well in the world of
Gotham. Gotham has done a fantastic job of building a character base and
storylines and can afford to not have Bruce Wayne for episodes at time, while
still remaining interesting and enjoyable. Next week it looks like Pyg rudely
interrupts one of Penguin’s dinner parties and we get to see Pyg and Jim face
off once again. The Pyg storyline has lasted longer than I expected it to, much
to my delight of course. 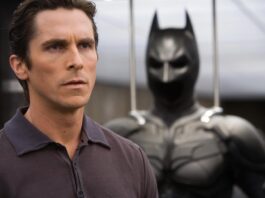 Christian Bale Reveals What It Would Take For Him To Suit... 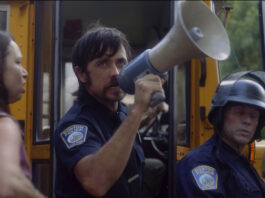 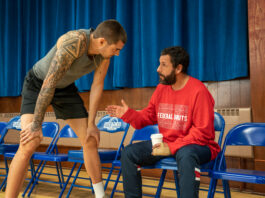