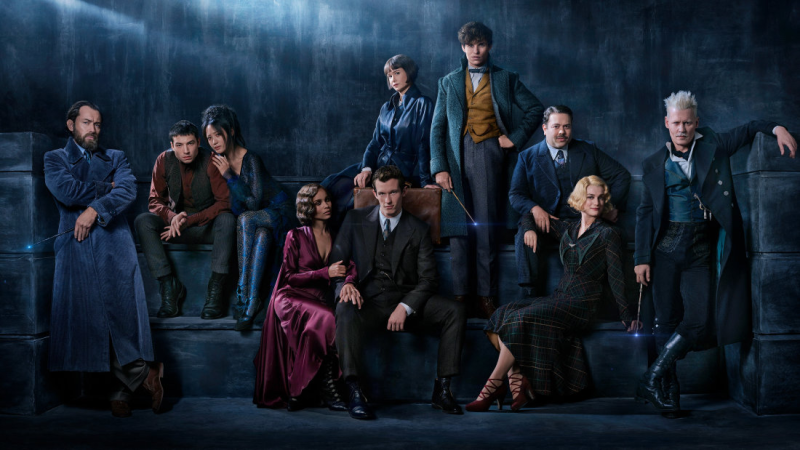 Today brings the magical first look at the sequel to Fantastic Beasts and Where to Find Them, and my first thought is “Thank Goodness” because they’ve given it a new title. From now on we can call it Fantastic Beasts: The Crimes of Grindelwald, for reasons that should get fans of the Potterverse soaring like they just entered a Quidditch match.

The image give us our first look at Jude Law as a young Albus Dumbledore, with his beard only at quarter-mast at this point.  Standing opposed to him is Johnny Depp as Gellert Grindelwald, and we know this franchise is building up to an epic showdown that has been teased in the novels but never captured on screen. And maybe I’m not totally down on my Potter lore, but does Grindelwald have the Elder wand at this point? Somebody clue me in.

Anyway. the image also shows returning stars Eddie Redmayne as magizoologist Newt Scamander, Katherine Waterston as Tina Goldstein, Alison Sudol as Queenie Goldstein, Dan Fogler as No-Maj Jacob Kowalski, Ezra Miller as Credence Barebone, and Zoe Kravitz as Leta Lestrange, who was barely seen in the first movie but gets an expanded role here. Her last name should send a chill down fans’ spines. We also see new additions Callum Turner (The Only Living Boy in New York) as Newt’s brother Theseus Scamander, and Claudia Kim as an unnamed character said to be the main attraction of a wizarding circus. Her name must be hidden for a reason.