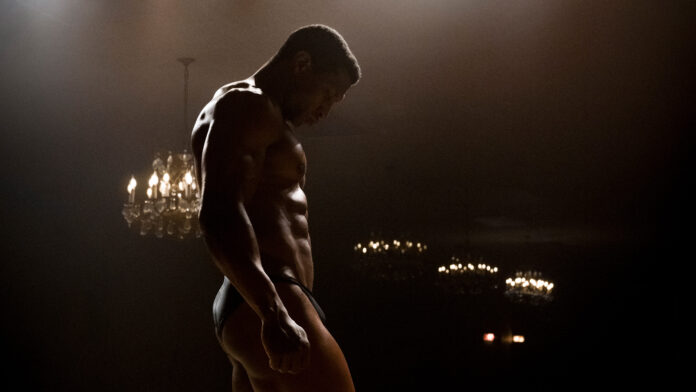 Get ready, because 2023 is the year of Jonathan Majors. The actor has been building incredible buzz ever since The Last Black Man in San Francisco and HBO’s short-lived Lovecraft Country. But he’s set to dominate the cinematic landscape with Marvel’s next Ant-Man film and for Creed III, the latter showing him jacked with the body of a champion bodybuilder. It’s that incredible physique which gets put on display again in Magazine Dreams, Majors’ juiciest role to date and a truly terrifying performance that will shock and divide audiences.

Majors plays Killian Maddox, a terrifying portrait of a certain kind of angry Black man in America. Maddox has reason for it, though. He’s got a shitty grocery store job. He has zero social skills. He’s the only one left to care for his ailing grandpa, a war veteran. Both of his parents are dead, both killed in a bout of domestic violence. Oh, and did I mention he’s a Black man in America? That comes with all of the tensions associated with it. Finally, as Killian explains to his therapist, the place where he lives is a damn food desert, too.

That makes it awfully hard for Killian to buy the four pounds of chicken breast he eats as part of a 6000 calories-per-day diet. See, Killian is obsessed with achieving physical perfection as a bodybuilding champion. Killian pushes himself past the breaking point to achieve this goal. He does more than just lift weights. There’s also the steroids injections to make his body grow at an alarming rate. He obsesses over his favorite bodybuilder, writing to him ceaselessly without ever getting a response.

Magazine Dreams is a dark and frightening character study that is never easy to watch. Killian is a scary dude because he is so real. We’ve seen guys like him at the gym. They are more comfortable with their weights than they are at making human connections. The muscles they carry look like they can withstand anything, but the damage done to the body to achieve them is astonishing. Killian is given to threats of violence. A favorite, that he’ll break open a person’s skull and eat their brains, has him on the police’s radar, hence the therapy sessions.

The path that Killian is on is a familiar one, and one that has been gaining traction again since the release of Joker. He is the angry, social misfit and loner who we know will do something awful one day. Throw in the chip on his shoulder (he hasn’t gotten over a judge’s years-old critique of his small deltoids) and a dangerous need to do something memorable, and Killian is the model of a future rage killer.

We may have seen this type of Taxi Driver-esque character before, but never from the perspective of a Black Man. It’s impossible to ignore how the micro-aggressions Killian faces on a regular basis, from the police and grocery store shoppers who fear him just because of the color of his skin, has affected him mentally. Writer/director Elijah Bynum takes all of that into account, and tries to reveal the humanity buried deep within Killian’s bulky exterior. He gives Majors a character whose humanity was gone long before this story began being told. But it’s that hollowness within Killian that makes him so chilling, with Majors creating one of the most intimidating characters ever put to film. Killian rages out often, but it’s in the quiet moments that he leaves you quivering. “You better watch how you speak to me”, he threatens his former boss with such murderous intent it’s a wonder the guy didn’t piss himself. Maybe he did.

Magazine Dreams does more than just look at the ugly side of bodybuilding culture and the toxic masculinity that often comes with it. There’s also body dysmorphia, homoeroticism, and incel culture that combine to reveal the depths of pain that Killian is quietly experiencing. Ironically, Majors does the heavy lifting to build Kilian into a real person that we can understand.

But is Magazine Dreams necessarily a movie that people will want to endure? It is disturbingly grim, even in the way it is shot, with barely a ray of hope able to peek through. There are familiar beats that we know to look for; the awkward date with the pretty, shy girl (Haley Bennett); and the eventual passion for gunplay. While these aspects don’t change much in execution, they can’t help but feel different with a Black man as the protagonist, adding an intriguing wrinkle. Magazine Dreams is sure to be polarizing, invoking strong reactions from those who appreciate it and those who don’t. But no matter where you fall, what’s undeniable is the overwhelming strength in Majors’ performance, and that should definitely not be missed.