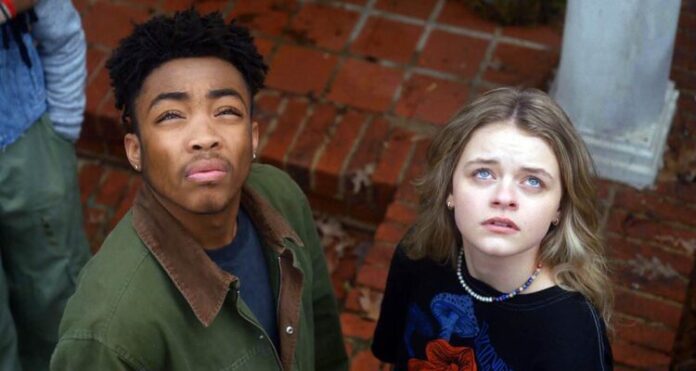 Sundance is littered with promising filmmakers who return to the festival, after making a name for themselves by having a distinct voice, only to misfire with a broad adaptation that stifles said voice. Fortunaely for Thoroughbreds and Bad Education director Cory Finley, he has avoided this worrying trend with the ambitious and delightfully weird Landscape with Invisible Hand, an adaptation of M.T. Anderson’s novel many have deemed unfilmmable. Gone are the acidic tone and devious-but-likable characters, in favor of a tone more akin to an episode of Outer Limits.

True to its title, the film’s scenes are staged by artist renditions over various types of canvas. These paintings introduce us to the Costello family over the course of a few years in the near future. Adam (Asante Black) is a genuinely good kid. A teenager with a gift for art, he’s the eldest child to Mrs. Costello (Tiffany Haddish), who was left a single parent when her husband (William Jackson Harper) abandoned them after the alien  Vuuv invasion.

Oh yeah, this is an alien invasion movie, but don’t expect laser guns and warfare to follow. Instead, we’re shown, again through artist depiction, that after some initial resistance, humanity’s corporate leaders basically rolled over to the Vuuv because…well, money. The Vuuv, who resemble uncooked chicken that’s been stuffed with a shoebox, have been imposing their will ever since, ostensibly for peaceful means.The actual impact is a slow decimation of human society. Students are taught whatever the Vuuv want them to learn through little nodes on their head. “I’ve been underbid by the little boxes on your foreheads” says one of their teachers, moments before blowing his brains out in the school courtyard.

But the Vuuv are also obsessed with human culture, in particular love. They watch classic 1950s sitcomes and imagine that as the ideal version of humanity. The Vuuv, who do not practice sex or romantic love, also enjoy watching humans fall in love and pay handsomely for couple to transmit their dates to be watched like episodes of television. With job opportunites scarce and poverty always a threat, Adam agrees to transmit his budding romance with Chloe Marsh (Kylie Rogers), a cute new girl in town whose hard-luck family (which includes Josh Hamilton as the patriarch and Michael Gandolfini as his bigoted son) is staying in the Costellos’ basement.

From here, Finley introduces a number of crazy ideas while also taking some big swings at social commentary. Some of it is pretty skillful, like the classism and racism that still exist even when the far more obvious threat to humanity are the aliens destroying everything in plain sight. There’s a powder keg of emotion building up in the Costello household as the power dynamic shifts, with each family using the Vuuv to gain the upper hand on the other. Once the Vuuv begin to disapprove of Adam and Chloe’s courtship, Finley introduces a clunky legal storyline that isn’t as fun as it should’ve been. But the humor picks up when one of the Vuuv actually moves in and begins making declarations to Mrs. Marsh, “Our home should replicate this!!”, it says pointing at what looks like an episode of Father Knows Best.

Finley establishes a fun, loopy tone, but this isn’t a laugh-outloud kind of movie. It’s just really odd and clever, and should find an audience who like their sci-fi on the weird side. Landscape with Invisible Hand is no fine work of art, but it shows that Finley is unafraid to take risks and try something new. If every ambitious effort is as successful as this, his movies will always be worth looking forward to.