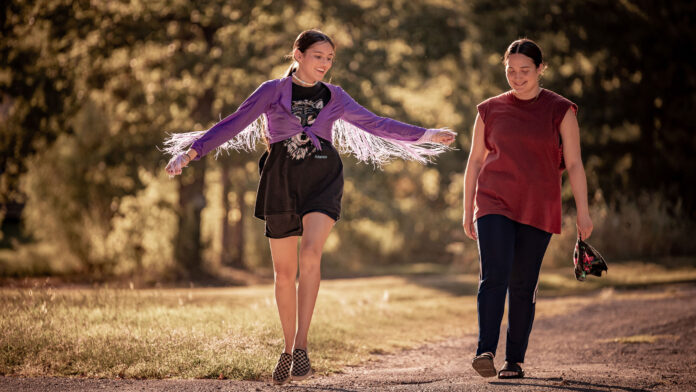 A woman and a teenager stand at a creek bed, the elder smoking and relic hunting, the younger catching crawfish. With the wind whistling through the trees and alternating between vast wide shots and tight close-ups of their faces. We watch as the woman takes off her shirt and gets into the water, exposing her long hair and hairy armpits. It’s the calm before the storm, but a perfect indication of how well-crafted co-writer and director Erica Tremblay’s first feature, Fancy Dance, will be.

We follow the two back into town and onto their Indian reservation and learn that they are not mother and daughter but aunt and niece. Led by Lily Gladstone as Jax and Isabel Deroy-Olson as Roki, the two go to a pawn shop where they sell their wares. As the younger woman walks around the shop, she stops at a bulletin board where her mother’s missing poster hangs.

Fancy Dance personalizes two pressing issues for American native and indigenous communities. The first is the high percentage of missing and native women that are overlooked by the authorities and the other is the placement and wellfare of indigenous children. With Tremblay’s script, the two issues are intertwined as Jax’s criminal record prevents her from taking Roki full-time.

Instead, Roki is placed with her mother’s white father, Frank (Shea Whigham), and stepmother, Nancy (Audrey Wasilewski). Both of her grandparents have not helped in the search efforts for her mother, leaving a bad taste in her aunt’s mouth. When the guardians refuse to let Jax take Roki to one last powwow, the former takes matters into her own hands.

Lily Gladstone delivers a powerhouse performance as Jax, knowing exactly what beats to hit to punch the audience in the gut. She’s raw, but subtle, giving Jax a lived-in texture that propels the film forward. Starring next in Martin Scorsese’s Killers of the Flower Moon, 2023 is the year she is going to blow up and Fancy Dance will help her do it.

Her chemistry with Isabel Deroy-Olson is layered and electric. A breakout performance for the young performer, Deroy-Olson gives Roki a naive and eager energy that brightens the screen. The bond the two share is palpable, making the film’s events more moving and heartbreaking.

Tremblay delivers one of the most cohesive films of this year’s Sundance festival, not a foot feels out of place with its emotional core. She and her co-writer, Miciana Alise, know just when to place Chekov’s gun and when to fire it, upping the ante every time. While the subject could be heavy in another director’s hands, Tremblay is a master of tone, ending the film not where you expect it but where you need it to.

Whether at Sundance, during its initial release, or even years down the line, Fancy Dance is vital viewing. Well-crafted and delicately handled, it’s a breathtaking portrait of the American dream from the perspective of those who were here first.