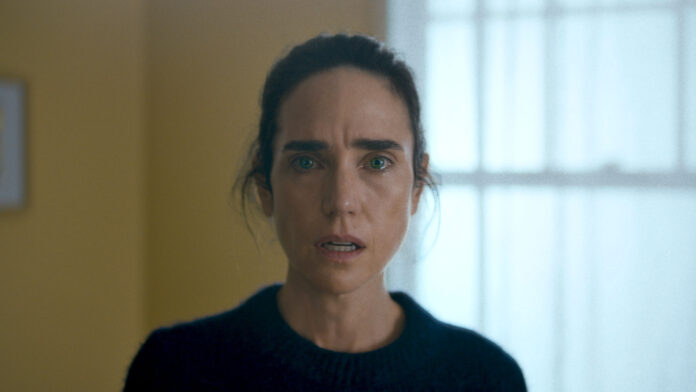 In just about any other place than Sundance, you could get away with not knowing Alice Englert’s family tree. But here, it’s impossible not to note that the actress-turned-filmmaker is the daughter of Jane Campion. Park City loves it some nepotism! But here’s the thing: Englert is not her mother. And her directorial debut, the whimsical, tonally uneven Bad Behaviour is not a movie that Campion would make. It is uniquely Alice Englert’s, who also wrote the script and co-stars in this mother/daughter tale of narcissistic personalities and poor judgment.

Perhaps making a cheeky nod to her own past, Englert’s story centers on a family that’s in show business. Jennifer Connelly stars as Lucy, a former child actress who is no longer in the limelight and not dealing with it very well. Her estranged daughter Dylan, played by Englert, is a stuntwoman working in New Zealand. Both women are about to make some bad choices. From their first brief, labored phone call it’s clear they have more alike than not, and we can imagine years of neither being willing to admit it. Lucy has signed up for an Oregon retreat, led by the sage guru Elon Bello (Ben Whishaw), to leave the technology behind and work on healing herself. Positive vibes only! Meanwhile, Dylan is falling in love with the film’s actor (Marlon Williams) while practicing for a big fight scene.

Englert’s instincts lean towards humor, for finding the funny in this broken familial pair. But that becomes a problem in the film’s first half, which largely focuses on Lucy’s time at the retreat, where she gets physical with self-centered model Beverly (Dasha Nekrasova), and bitches about how hard her life is. It’s not. Lucy and the other attendees are undeniably fake in their own ways, but this portion of Bad Behaviour shouldn’t feel as phony as it does. Ultimately, Englert is hoping to portray real people with real problems, and large chunks of the film work against that. Visually, the film is beautifully shot with soft lighting giving everything a warm glow. But occasional diversions, like an animated sequence that pops up at the worst possible time, are an unnecessary distraction.

But it would be a lie to say that Englert doesn’t find her groove. It happens during a brilliant, hilarious, and quietly poignant scene in which the retreat attendees are paired up. One acts as the mother, the other as a baby who can only communicate as a baby would. Lucy is noticeably uncomfortable at this, swaddled in blankets by the one person she dislikes most. The experience strikes something painful deep inside of her, leading to a breakdown of epic proportions.

Bad Behaviour really hits its stride once Connelly and Englert are able to share the screen together. Both women are terrific actors, and I would say neither gets the credit they deserve for that. They flesh out Lucy and Dylan’s relationship in ways both subtle and grand. Lucy is closed off and unable to trust others, but most of all she doesn’t trust her ability as a mother. Dylan is physical, quirky, and emotional, given to flights of fancy. She projects a toughness so as to hide how much she has been hurt by her mother. Lucy is also unable to express how much Dylan’s physical and emotional distance has been a source of great pain.

Whle imperfect, Bad Behaviour shows Englert to have a ton of promise as a director. She’s already got the confidence to trust her gut and a unique voice, two things a lot of filmmakers never get. While her best work is in the hopefully not-too-distant future, Englert’s feature debut is a modest success and shouldn’t be overlooked.