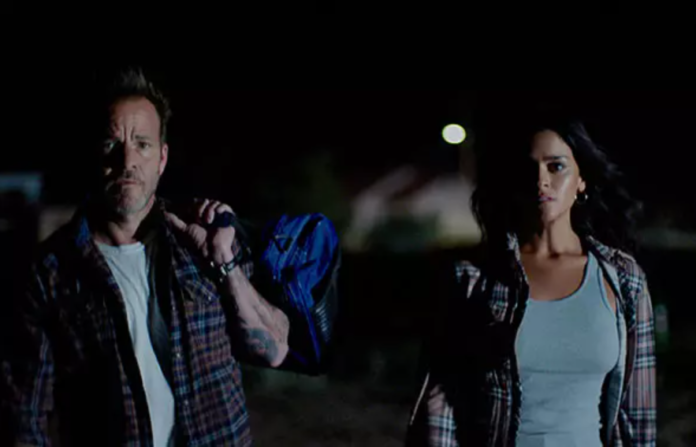 Have you ever found yourself in the wrong place at the wrong time? Grace (Gigi Zumbado) knows that feeling all too well in The Price We Pay. She happened to be in a pawn shop right as it was about to get robbed. Cody (Stephen Dorff), Alex (Emile Hirsch), and his brother Shane (Tanner Zagarino) have a job to do for some mysterious “boss”. Nothing goes according to plan – their getaway driver abandons them, Shane gets shot, the cops are coming. The group decides to take Grace as an insurance policy and her car as an added bonus. 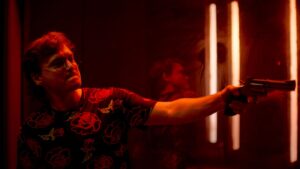 Due to further unforeseen circumstances, the group ends up at a creepy farmhouse. One of those buildings that somehow only seems to be visible at night. They stumble upon Danny (Tyler Sanders) who is doing some late night cleaning. Danny is clearly not used to visitors and warns about Grandfather (Vernon Wells) coming home. Before long Alex stumbles upon a secret basement dungeon bathed in red light. If that’s not an ominous sign, I don’t know what is. Danny was right, Grandfather is not someone you want to meet. Unfortunately, the entire group does. Now the question is how can they get away. 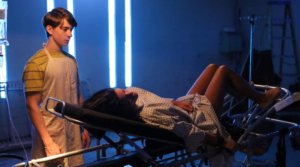 The Price We Pay is directed by Ryuhei Kitamura and written by Christopher Jolley. Both Kitamura and Jolley have quite a few horror films under their belt, so the genre is familiar territory. Kitamura employs tons of choppy shots throughout the film, although he doesn’t pass up the opportunity for a landscape shot. Jolley’s script features the typical horror movie characters action’s that leave the audience groaning and dumbfounded. In addition, there are monologues that don’t land. The Price We Pay has a very small cast. The main issue is that no one is truly likeable or connects with the audience. That coupled with stiff acting throughout isn’t a good combination. 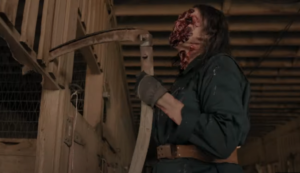 Hirsch does stand out as the main bright spot amongst the cast. Hirsch’s character certainly has a few screws loose, and he seemed to embrace the role. The Price We Pay is chaotic and graphic. It is not for those with a sensitive stomach. While some of the gore looks incredibly fake, there are scenes that look real enough to not be for the faint of heart. The film lacks true scares and instead overloads with blood and guts. The Price We Pay is entirely forgettable and there are better options for those looking for a scare.

The Price We Pay is in select theaters, digital, and VOD now.