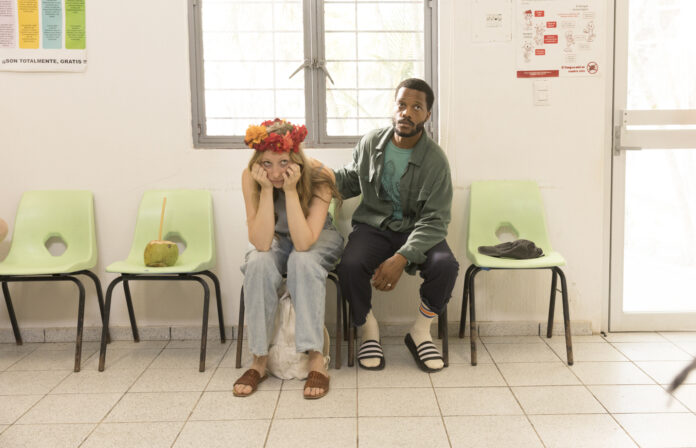 Babies. How a person feels about them and, by extension, their desire to be a parent someday, is the ultimate guidepost for a relationship. A couple pretty much has to be in perfect agreement on this fact. You can’t have one person who wants kids and another who doesn’t. It’s a recipe for disaster. So what better way to explore the anxieties that come with potential parentage than through a cringe comedy where a baby gets dumped on its head?

The Drop, which debuted last year at Tribeca and debuts on Hulu this week, largely deals with the aftermath of a baby being dropped while in the supposedly careful arms of a friend. Think about it for a second. We’ve all seen babies fall, typically of their own clumsy accord. But to drop a baby is like a taboo. It simply isn’t done. Now imagine that it happened at the start of what was supposed to be a celebratory weekend at your friends’ destination wedding? Talk about a cold chill over the impending nuptials!

Director and co-writer Sarah Adina Smith focuses on loving couple Mani (Jermaine Fowler) and Lex (Anna Konkle), who have reached the point when they are trying to have a baby. They live in Los Angeles, mainly because Lex runs a bakery out there, even though it takes Mani far away from his family in Brooklyn. Basically, Mani has turned his life upside down for Lex, but does he feel at home just being a part of her world? Things get more anxious when he’s dragged reluctantly to a wedding at a Mexico resort, full of her wealthy, obnoxious friends who he doesn’t necessarily fit in with.

Did I mention that Mani and Lex are an interracial couple? Yeah, there’s a lot of anxieties swirling around that nobody necessarily wants to speak about. And that’s sort of the point of The Drop. People would rather be passive-aggressive than reveal how they really feel. Even when, in a total freak accident, Lex accidentally drops bride-to-be Mia’s (Aparna Nancherla) baby, nobody wants to actually talk about what happened.

The baby…well, the kid is okay, plus one ridiculously oversized helmet. But the adults are thrown into chaos, most notably Lex who spirals into hallucinations and worries about what this means about her fitfulness as a parent. But the film is more interesting when seen from Mani’s perspective, as a nervous Black man among a group of rich, entitled weirdos who have no concept of personal space. Fowler’s facial expressions are a riot, and this is coming from someone who is definitely NOT a Fowler fan, but I felt it everytime Mani was forced to walk on eggshells around these people because they’re his wife’s friends. In one hilarious scene, he barely holds it together while two guys talk about the smell of their wives’ vaginas.

Directed by Sarah Adina Smith, who co-wrote the script with actor Josh Leonard, The Drop packs a lot of anxiety into its 90-minute package. Fortunately, the cast is bursting with stars who are naturals at high-energy sketch comedy. Leonard and Jillian Bell play married couple Josh and Lindsey, who have left the city life behind to run the natural vista where the group is staying, but all they really want is to sell some timeshares. A Black Lady Sketch Show‘s Robin Thede and Ghosts star Utkarsh Abmudkar are pretentious actors Shauna and Robbie. Their son Levi (Elisha Henig) is the most unbelievable, and thus least funny, character in the film; a teenage horn dog who leads a “No Wanks” movement. Jennifer Lafleur and Aparna Nancherla are soon-to-be brides Peggy and Mia. The latter has grown increasingly paranoid and *gasp* more conservative since having her baby…so you can imagine how she feels about Lex after the whole dropping incident. There’s a gun involved, but Checkhov is nowhere to be found.

Smith has said her inspiration for The Drop was to create a female equivalent of Force Majeure, a film that explored what happens when a man fails a basic tenet of manhood. It’s a fantastic idea that doesn’t work in execution, simply because Lex’s immediate reaction to dropping the child is too far over-the-top that we can’t believe any of it. It’s when capturing the growing insecurities between Lex and Mani that the film is at its funniest, because their dynamic feels so natural. A lot of layers are at play here, like the fact that Lex has pretty much slept with every other person at the wedding. This causes a lot of awkward conversations for Mani, and a reasonable amount of frustration towards Lex as she tries to reconcile her feelings about parenting.

The Drop packs a ton of jokes in a brief runtime, and with such a genuinely talented ensemble they land more often than not. Relationships are funny, parenting can be funny, and as it turns out, dropping a baby can lead to a lot of funny, too. We’re probably not supposed to admit that, but being able to shows we have the maturity to accept that parenthood is unpredictable. Best to buy a helmet just to be safe.

The Drop debuts on Hulu on January 13th.